Is the Gun at Peace with Itself? 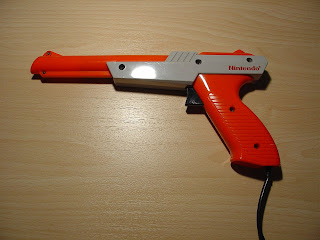 Deleuze and Guattari’s work, Capitalism and Schizophrenia and later a Thousand Plateaus posit a post-Oedipal world composed of a symbolic space devoid of the “old dimensions” where individuals associated freely with guilt, and symbolic debt in a well fortified system of desire composed of limits that the psychoanalyst was able to bring under her control.

The true-nature of global capitalism has dethroned the psychoanalyst from an elevated position of authority, where she was the arbiter of the “Mast-Signifier” world, her participation from the symbolic late-Capitalist universe of symbolic authority is no longer. Where has symbolic authority reemerged then if Dr. Freud and disciples have disappeared from the scene?

Lacan put forth four plausible models open to psychoanalysts as viable adaptations for a late-Capitalist world:

1. Psychoanalysis continues to act as if nothing has changed and that the fundamental structure of the unconscious remains the same as Freud outlined and the changes taking place are merely superficial. (traditional/conservative and non-reactionary paradigm).

2. Recognizes the shift but advocates a return to an enforced Parental Law – with deliberate and clear limits for symbolic authority. The existence of a post-Oedipal society is to be denied on the basis that it is always on the brink of terror and catastrophe and must be reconciled through assertive reassertion of clear Law and injunction. (conservative/reactionary).

3. Attempts to remain Freudian in essence but seeks to fuse theory with neuroscience and seeks justification of the success of psychoanalysis via emerging science – also by redefining our new postmodern anxieties, and is always on the verge of the new discovery and merely adapting to an ever-changing scientific community. (Liberal Third Culture, American academic).

4. There is an utter libidinal deadlock toady based on the irreconcilable forces of modernity “as such,” as in modernity has reached a full political-ideological predicament that has come to constitute the free flowing symbolic authority, and any easy reassertion of a symbolic authority as outlined in 2 and 3 is also implausible and must be rejected. (Radical-Progressive).

So then how do we come to understand the current ideological-political tectonic shift that has given rise to the progressive view of symbolic authority? The shift must be understood first by metaphysically deconstructing capitalism. The capitalist society can only survive as its own excess – through constantly exceeding its own normal constraints. In an authentic Hegelian synthesis, the two opposites of the dialectic, in this case the state apparatus of domination that create the ideological situation cannot be reconciled; the differences are posited “as such.” Again, a true dialectic reinforces difference, and does not meld two poles.

The two poles of postmodern life which make up the system of desire – on one side, a self-regulated system that constituted by the master of psychoanalysis, the state controlled commodity individual happiness model – the flip side is the narcissistic individual hell-bent on “self-realization,” (self-control, dieting, remaining P.C., jogging) – this is the Biopolitical side. The “individual happiness” paradigm argues for a mediated commodity-driven “pleasurable life,” a life that demands an all-out eradication of harmful experience and the abolition of trauma (clearly very compatible with 1, 2 and some parts of 3). This line of state-induced individual happiness stems the American Dream, etc.

Both faces of the synthesized “Biopolitical-system” then have an historicity that bases the master-signifier as the society of Discipline and Punish (as in Foucault) the administered world (as in Adorno) the rationalized society (by Habermas). The biopolitical system is a Janus-Faced entity that emanates a vicious-schizophrenic subjectivity that is inherently “hystericized,” and a supplemented university discourse that is mediated by “experts” legitimized by their knowledge; or the excess of doubt, of permanent questioning. The subject is then placed in the role of knowledge in the psychoanalysts discourse and the subject is responsible for getting rid of the “ideological-political” situation that has come to constitute his (the subject’s) unconscious predicament. The emergence of a society of self-help, (meditating to better perform at work, guides to healthier living, western yoga, etc.) are an attempt to cope with the irrational “call to enjoyment,” – or, how do we handle the excess, what Lacan calls Jouissance?

Hegel’s dialectic that brought about the birth of Christianity out of the ashes of the feudal/slave society is appropriate here. For Hegel, the rise of Christianity was the culmination of a global “slave consciousness” out of the ashes of feudal “master consciousness,” in other words, Christianity is the clearest Global expression of the dominance of “slave consciousness” over the hegemonic hold of feudal master consciousness. In a similar form of emergence, the rise of late-Capitalism, or in this case the very structure of Biopolitics was created by the Master, (our traditional psychoanalyst) and his authority has been what Hegel declared a “global-reflexization,” or the notion that the psychoanalytic system has already interpreted its own problems and left its situation in “infinite judgment.” The problem of infinite judgment brings to issues of reconciling what Zizek has called “Id-Evil” brings me to the key point here.

The society based on limitless desire to some extent requires a Law, or demand. As in the Oriental-influenced call to unbridled desire surplus, “Just Do It.” What this brings to subjects then is a cruel confrontation between the “society of pleasure” that has no clear injunction or Law, causing an unchecked Id-Evil, as in Fundamentalism, neo-Fascism, etc.

What the other is fulfilling in this case is the symbolic lack found inside of one’s own desire system. The other then bothers us in that they appear to have a privileged relationship to the object – by either possessing the object treasure, or by posing a threat to our possession of the object. This global-reflexization leads to Hegelian “infinite judgment,” the notion that the psychoanalytic system has already interpreted its own problems.

A friend of mine recounted a story of a theater that replaced their real metal swords with wooden swords as a symbol of hope and nonviolence after the Virginia Tech tragedy. What is this statement really advocating, if not an Oriental radical passivity to violence? Perhaps without knowing it this move was attaching hope to the notion that there is no self behind the object-weapon, that the weapon itself is the object to be condoned, as in DT Suzuki’s statement that the “Gun is the one that does the killing.” The gun is the one that does the killing because “the one” is at peace with itself, as is the self, because it doesn’t exist either.

If we accept this passive link to the object of desire surplus and negate the existence of a self – what we are really claiming is that the self is also non-existent in the desire system because she is constituted on a radical antinomy – the one outlined above between biopolitics without a clear injunction and Law. Is not the need to insert a clear conservative law the very basis of the western belief in non-self, which is really a passive Oriental adoption of subjectivity based on a cooptation of responsibility in the limitless system that lacks a sufficient symbolic other to “take out” all of our violent desire surplus on?