Fundamentalism and the Other 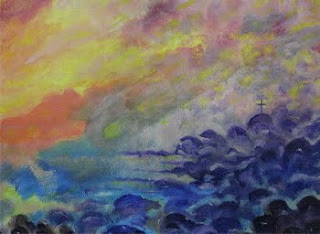 Fantasy for the non-Fundamentalist provides the answer to the question “what does the other want from me?” the immediate identification with the fantasy-in-the-other closes the gap: the enigma is solved, there is no mystery of the other – we now know the whole answer. Our participation in the symbolic system is dependent on a Big other that is totally unaware of – or at least we are convinced that our Big other is not aware of our sins and ethical violations. Indeed our dependence on the other makes all of our change in a vacum. We are only ready to change as long as he does not change in our other.

The subject’s consciousness of himself is embodied as something that still does not know itself from consciousness. In this case we are all brutal modernists that depend on a belief in the other that he does not know, because it helps to maintain the order of things. The subject would only change if he were to arrive at knowledge that the other knows that it doesn’t exist.

The post-Oedipal system of desire balances this delicate dependence on the other, which really repesents a radical death of the Big-other. With the dath of the big-Other we are experiencing a social-spiritual-substance constituted by no existence itself. What disappears with the existence of a big-Other is the evaporation of “private life” itself, which actually means the death of public life itself. With this impasse in the public ideology system of desire Yeats’ poem The Last Judgement may have to take on new meaning.

Yeats’ call that the best lack all conviction, while the worst are full of passionate intensity equals: “best men” are those able to sustain themselves in the symbolic ritual, i.e. they are the one’s who are conscious of the need to go on with out the Big-other, while the worst are those that must take a part. Indeed the one’s (best one’s) who pretend to not be affected by the symbolic system are the most harmed by it.

Perhaps the twentieth century ideology-plagued wolrd that Yeats wrote the Last Judgement deserves further analysis. I believe that we need to consider reformatting our alignment of Yeats’ “best.” While of course Yeats’ anti-Politically Correct highly modernist labeling of “best” is still acceptable in a recent story of American populism.

Take the recent Senate race in Virginia with Jim Webb and conservative Bush-supporting and Fundamentalist Christian supporting George Allen. Why was Webb, a pro-Reaganite, fiscally conservative democrat able to rally one of the largest web-roots campaigns that mobilized the disaffected, (primarily youth) from the progressive summer of 04’? I see that Yeats’ relevance is still alive in this instance in that the liberal multiculturalist-relativist was able to back a candidate firm in “convictions,” i.e. Webb is someone who is strong enough in his own convictions to represent everything that Kerry did not represent. He wouldn’t let his war experience be shattered – is this new version of counter-reactionary progressive-populism, composed of liberal “down-home values” and patriotic revolt not a radical dependency on a big-Other that was actually created by the Fundamnetalist discourse?

Were the Webb supporters not exemplifying an inversion of Yeats’ poem by embracing the symbolic order in a pseudo Fundamentalist view of the other, I paraphrase how Lacan would have put this situation; once the subject has become aware of the very existence of this other dimension of identity (of what I would call neo-private life) they have access to the system beyond the vicious cycle of Law and its transgression, and to the reactionary-progressive, the battle against their own fantasy of the Fundamentalist is formally won.

The landscape of the American Fundamentalist revival (perhaps it has never taken on such intense forms) is not based on an exclusion of an ethnic or racial other. The battle of the other was always an intra-identity, or quite literally a white-on-white issue, which always tend to be the most potent kind of ethnic, racial and religious conflict.

Who is the enemy of the Fundamentalists? One of the post-1970’s political compromises in the wake of the civil rights movement which were largely and inappropriately negotiated on the basis of identity politics is the Great Society reforms. The specter of the “authentic American liberal,” emerged out of these reforms, the archetypal American-elitist-liberal whose identity has followed a mythic narrative – he has been enthroned through a state intervention project, beginning with the “Great Society” and his existence is similar to the Big-other itself, because it has arose via a conspiracy that we are unable to pinpoint.

The “culture war” itself of course is a displaced class war, where the very concept of culture has grown into the name for all of those things we practice without really believing in them. Culture is the empty ritual, what Baudrillard would refer to as the simulacra of belief and practice. Perhaps the Fundamentalist is reacting to the perceived threat imposed by an imagined American-liberal-elitist who has an advantaged privilege to the ritual of a non-existent culture. The is precisely why the “politics of subtraction” is appropriate here is that we can reduce the overall complex structure of the American culture wars to the world of Marx’s commodity fetishism.

So then the real objective and things to change in the explosion of commodity fetishism’s is to change the way that commodities talk amongst themselves. Zizek’s view that commodities are the very world of material-social life-world activity that has the most effects on the real indicates the core of the politics of subtraction. Take Marx’s notion that if commodities could speak to one another they would say: our use-value may interest men, but it does not belong to us as objects. What does belong to us as objects, however, is our value. Our own intercourse as commodities proves it. We relate to each other merely as exchange-values.

Because I have always been sympathetic to the Left and their fledgling approaches to social change, I will outline some of Zizek, Badiou, Hardt, Negri and other Lacanian philosophers views on “What is to Be Done?”

Because the Lacanian left is rich in theory but low on public strategy (the public is already dead as such) their political and social action that derives from “the critique of ideology,” – is that we must intervene in the obscene underground of the Universal Law; the real task is to challenge the underside to attack what sustains the symbolic order’s dependency on the kernel of power , a disavowal of power on the part of the master and the simultaneous hold over that power.