Some Perspective on Kerouac’s America 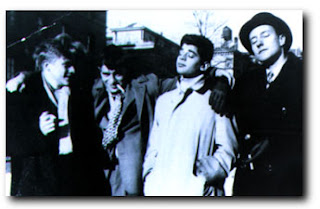 Perhaps it took the cold war to end for the Beat canon to be inducted into the graces of good criticism. The dizzying commodification of the Beat style popped up, as an immediate archetype: the quintessential hipster, estranged from the mainstream, revolting against the power establishment, against exploding gadgetry and technology, the American youth icon who was made static and who was always too obviously and simply at odds with the rigidity of his parents.

The authentic American myths put forth most effectively by Kerouac and Ginsberg were not taken at the depth or profundity they merited. The new Left, and earlier the Trotskyites, rendered the Beats as: “sex, blood, instinct, a spontaneous revulsion of the over-buearactatized establishment.” The civic religion of post war America mandated a cohesive response to external threats; marginal movements were threats, viruses… To the establishment intellectuals, the high-brow T.S. Eliot’s and late modernists, the Beats were vapid, and laced with empty Marxist diatribe, promoting facile transcendence for the coming revolutionary youth who had it all wrong and were merely hungry for a style to live by. Neoconservative intellectuals such as Norman Podhoretz’s article, “The Know Nothing Intellectuals,” and Mailer’s temptation with the underground, which Vidal dismissed as a mid-age life crisis or simply sexual frustration accordingly, the Beats were unsophisticated and irrelevant.

The Beats were indeed static icons of the American scene upon their emergence into mainstream consciousness also because they were caught between major cultural change, amidst the larger integration and adoption of Europe’s decaying decadent cultural values and positions: it was this tension that underpinned their vision of America. An historic interpretation of the Beats opens up new levels of seriousness to attach to their legacy; I’m not saying their importance and nearly pervasive influence is at threat, far from it, rather that serious critiques of the Beat philosophy and canon have since been hagiography and the stuff of vapid and legendary biography, critiques always devoid of the deeper perspectives and missions of the Beat project.

Quite recently the Beats have become significant cold-cultural-warriors for that special case of America, always in quest for a national identity. Their quest had run headlong into the concept of American exceptionalism and the postwar religion of fear of external threats/paranoia, which had fashioned America in narratives that the Beats found to be exceptional, yet in completely different terms. The beats version of American exceptionalism was connected to an outside, always to the other, to the outside of the status quo, which is perhaps why its potency resonated in totalitarian Russia and Eastern Europe during the cold war with Euro Beatniks, etc. So the criticism has went, always hitting the general trends and terms of the Beat worldview, but never detailing those deeper and more elusive currents of thought which were essential in forming the Beat ethos and worldview.

The Beats worldview was hinged on an America that they could only connect with via a grand mythological correspondence. Each writer looked to the visions of unfettered democracy, spiritual individualism and the pastoral dream, what they saw as the central promises of America. The mature Beats of the 1950’s were stripping the dominant and facile myths of the present reality and reinventing a past more attuned with the values that were distinctly American.

I am a Keroucian and will always remain so, and as all defenders of heroes, I wish to defend and illumine his own objectives as a performative artist, and what he actually was obsessed with, what his “IT” was. Kerouac’s immersion of Spenglerian metaphysics guided his myths of America and actually formed the habitus of the Beat libertine circle, (habitus – an anthropological term that refers to the process of artistic maturation and development inside of a group) and Spengler instructed Kerouac’s didacticism for his fellow American’s. Even after his mature Road novels and certainly throughout them it was always the “fundamental ground” of living, a return to that primordial state where we are unaffected by the massive cultural and technological changes taking place in America, and indeed this return would be the basis of his distinctly estranged American Catholic Mysticism.

Kerouac’s true life fictions were based on the notion that society had to be reinvented and that his “audience” consisted of a predetermined cast of American characters that were infinitely remote and strangely immanent: a utopia. It was his idea of utopian America, his “nowhere” – the world that could neither be achieved nor fully realized except through deepest penetration of pure experience that is perhaps most imitated, I’m thinking of Jim Jarmusch and David Lynch…

The pastoral dream that founded America was most vivid in pretechnological Mexico, where Kerouac found a looming allegory for his cultural message to America, a place where cosmic harmony was alive and innocent. His performative Baptism’s (or novels) would cleanse his own lens onto America and served as a symbol to his grieving for the return to that natural state that founded America. Mexico was a rite of passage, a spiritual Eden where even the people were without history, uncorrupted by industry, consumerism and social institutions – Kerouac’s negative reception in the politically correct halls of academe arose largely because he held a Spenglerian view of race, as a spiritual construct, a cultural concept, rooted in the landscape. His rather naïve desire for the primitive return would distort his view on women; however, he used this notion of race as a way to protect innocence and to judge in messianic terms the sins of Americas via an intersubjective, imagined perspective through a racial other. Kerouac used marginalized people’s and subcultures as a conduit to project the great cultural apocalypse of America, where “the future lived in the negro.” While Kerouac’s racism is tepid by most accounts, a “melancholic romanticization of otherness,” it was a paradoxical statement on his white subjectedness and a response to a perceived incursion on his own social authority. Yet, Kerouac was an artist using metaphor and history to riddle the problem of America in myth and poetry, making such unique and revisionist views of race are acceptable to me, and more importantly, race, as all status quo values was to be transformed to conform to the mythic worldview of the Beats, but it was far from dry memesis, the transformation or transvaluation continually held to an ideal past in order to change the present in a radical way.

The future was something to be realized, something that would be heard and found after the performative gut wrenching ritual of creating the authentic art, an art that was in war for the tropes, symbols and signs of America. Semiologist Roland Bathes claims that such battles are always centered around signification of the sign around ownership of the sign. Inevitably, the beat discourse took the flag farther and farther away from the subterranean into what became a “second order language,” a meta-discourse that could restore America to her “metaphysical radiance.”

Kerouac’s deep interest in Decline of the West, Spengler’s magnum opus, guided his search for the authentic retelling of an American experience. The role of America in the world held serious cultural responsibility especially under Spengler’s idea of pseudomorphosis, a theory of cultural change, where a culture’s inner essence was in direct conflict with it’s outer nature – America was heaping Europe’s destructive soul in the form of the post war boom, teeming with conformity, consumerism, technological dominance, where the status quo civic religion had expired the real values of America, and Kerouac’s journey was for himself, but it was also intimately tied to this religious return…