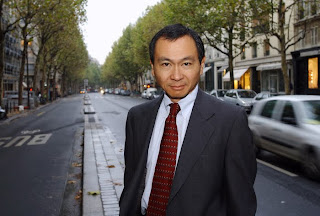 The premise of an end to global ideology is compelling and in some ways very much upon us. The best account of how such a potentiality is so gravely misunderstood by elitist policy circles is summed up in Francis Fukuyama’s “The End of History and the Last Man.” Similar to the “Clash of Civilizations” effect, Fukuyama’s treatise became very popular and emblematic, as the grand theory on foreign relations in a post cold war era. The text is ironic in that it is a geat admixture of idealism and tough cosmic, even philosophical realism, which goes a long way for policy makers who hadn’t read any Nietszche or who had been taught in during the conservative Age of Strauss that Nietszche stood for power and instinct – raw competition. The kind of realism with a savvy pro-market mind, in essence, Fukuyama justifies the spread of democracy philosophically by huge misreadings of Nietzsche’s Last Man, bringing international relations into a romanticized Hobbesian struggle of ‘Last Men:’ those with chests.

The book is based on a few human nature realted questions: what happens after the both the thymotic struggle for recognition from others and man’s independent struggle with nature has been satisfied? What happens when man is recognized by humanity and given conditions for material prosperity? What happens when man is given democracy? According to the unimaginative Fukuyama, man becomes dog, unable to say anything new about the human situation.

A little bit of Fukuyama’s views. He believes that man is most free when under going political turmoil, in non-modern conditions, or most appropriately: when he is living under conditions of infinite injustice. In a post-historical age (i.e. – after the cold-war) there are two forces that control the modern beast; isolathymia – the tendency for man to homogenize difference with his fellow man (something like socialism) and megalothymia – the force which calls for greater difference from one another, (capitalism). The society of megalothymia (capitalism) is the grandest and bravest of societies, as attested to the version of man as beast worldview. The body-politic has found rational consumption to be what it is, banal and boring so they revolt against it. That as Last Men we have made life superficially exciting through seeking thrill and pleasure, (cites examples of skiing, kayaking, etc.) yet we can never get enough of the mayhem of rugged existence, we always will have to live as Hobbesians, in struggle against one another as that gives us the purest sense of animal existence, in competition with our vital instincts.

Capitalism’s invention of Liberal-Democratic capitalism has ruled these “passions” through the entrepreneurs drive to dominate nature: man lives his animal nature in a meta situation composed of new signs, where accumulated wealth equals man’s struggle against the new nature: society. Bourgeois is no longer a class distinction but is now a lifestyle choice. Bourgeois has been taken out of any context representing elevated status, position or dare I say power in society, after all, all things are equal in the open wilderness of rugged capitalism, where every man is out for himself, (and against himself) which according to Fukuyama has proven to be the only way we can mediate our modern lives. Society operates without power and injustice, and all signs of competition with other men are indicators of “spiritual health.”

The only way the body-politic is able to fend off the equalizing and bourgeois tendencies that force homogenization is for one to remain in the centuries old fight for recognition. While Hegel had brought the issue of recognition into metaphysics, Fukuyama’s reliance on the dialectic is fleeting at best, because he has misplaced the entire basis of man’s struggle against other men as having to do with power based issues, as those rooted in property, concentrated power and corruption of the elite. Fukuyama’s irrational fear to even mention the specter of Marx brings his argument into such antiquated spiritual justifications of human action. The forces of globalization are another word he conveniently omits from the the end of history, omitted largely because we ‘men without chests” are too sophisticated for such conspiracy theories. Indeed, Fukuyama’s book is the hubris of American neoconservative intellectuals par excellence.

All of Fukuyama’s book is written as if we have entered a post workers rights, a post sexual liberation, a post third world: that a utopia has been achieved. There is nothing left to fight for, the end of history. What will our advanced societies do now?

Society in this case becomes an idle and boring object which formerly held a glorious opportunity to connect the passions to a visceral revolution or even to war. Fukuyama invokes Nietzsche’s last man as exemplified most appropriately as the modern business man, the capitalist entrprenuer, (who can’t seem to succumb to the peace and tranquility of his post-historical/banal existence) causing him to turn on the social interest, leaving him in a solitary struggle amidst a post everything world where he must learn to reinvigorate his primal struggle with nature because he is so misdirected.

The role of leadership in advanced societies according to Fukuyama has reached such levels of justice and equality that we now have many little Napoleons’, from the chief executive to the President, each of the chosen few is a, “first among equals.” With the domestic home front of leading one’s fellow citizens equalized the only other arena for the last man is in foreign policy, this is where he can exert his messianic calling.

Where Fukuyama’s argument becomes most Fascistic is in his commentary on art in the post history era: in such a stage of historical development art is unable to make social commentary, is unable to be socially conscious. Art in the post age is purely formalism, is purely elegant bourgeois crap. Thus we post humans are in a value tension with the equalizing power all around us and true art is impossible.

As if “democracy” and “globalization” were eliminating oppression at photon speed and bringing the global community into a post-human phase devoid of the Hegelian dialectic.

The paradoxical confidence in America that Fukuyama holds so dear, at one time we are the greatest specimens because we have mastered nature and at the other side, we have been left alone and are bored with competition so we must commit hubris.

This romantic misreading of political philosophy has really led to America as the confident beacon of providence, empty, yet manifest destiny. Like Baudrillard on the smile of Reagan, it equalus: “I am a winner” because I have lost the ability to fail. The confidence is an effect, merely living out a cause, it is a supplemental confidence, a confidence that has been instilled as in religious cults and millenarian movements – a disavowal of failure. Reagan’s power is a sign of the failure of the eclipse of the American prophecy.

The prophecy that is ingrained in the empty marketing of of joy indicates what the form of Fukuyama’s argument really is: that America is suffering from the absence of ideologies that might contest its power and from the weakening of all the forces that previously opposed it. Political decline but PR ascendancy!

The dominance of the American global image of power and influence is based solely on the advertising image. America’s real power is soft and is in the form of a gigantic inertia machine, an effect, not a cause anymore. We control the world from a fire started decades ago in remote parts of the globe and are living on borrowed time off of an image and model of governance.

The real idea of America is performance, the visual act of success as manifested in the generation which has lost all touch with “being marginal” from the (60’s and 70’s) and have turned inward to satisfy their bestial pleasures leaving it to the Last Men, (in his fraternity days Fukuyama would have said ‘real men’) to start the wars because they have too much spiritual life-force not to constantly push away from forces making them stay the same.