The Problem of Religion and Justice in Levinas 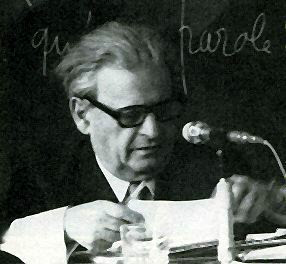 Levinas brings the issue of justice to bear on philosophy in a radical new way compared to the phenomenologists and moral philosophers of his time. The famous philosopher of alterity and the other, the Jewish prophet of post war avant-garde France, Levinas’ contribution to ethics as based on the ontology of being is essential. Basically, the problem of the I in relation to the totality is the source of the issue of justice.

Levinas’ notion that transcendence into being-for-itself as the origin of violence came out of a much larger metaphysical theory of thought. Let’s start with the beginning of thought, when it becomes conscious of itself and at the same time conscious of the exteriority that goes beyond its nature, when it becomes metaphysical. The central experience of life welcomes all exteriority on the basis of what is the it’s interiority, or subjective constituted reality. In thinking, the being situated within the totality (the constellation of beings in the world) is not absorbed by it. It exists in relation to it, but remains here, separated from the totality: separated from me.

It is the problem of innocence itself that is not resolved by the simple affirmation of the separation between free beings – since innocence entails a relationship between beings and engagement in totality. Innocence must exceed the terms of vital consciousness yet at the same time it must not be vital consciousness. The penetration of a total system into a partial one that cannot assimilate it is miracle. The possibility of thought is the consciousness of miracle, or wonder. The miracle represents the rupture between thought and the lived; it is the beginning of thought. Thought is then always consciousness of the new.

Indeed, to think a freedom exterior to my own is the first thought. Things affect us as possessed by other people. When pure nature does not testify to the glory of God, when it does not belong to anyone, it is located on the margins of the human world: of property. Before the things that I am familiar with in the world is the condition of innocence. The problem of the relationship between the I and the totality is the work of economic justice. The work of economic justice articulates the relationships that make possible a totality of beings exterior to the totality, the capacity for innocence and their presence to one another. Thus the work of economic justice already achieves spiritual existence, but love is unable to fulfill the condition of relations and is subsumed by an impersonal and coherent discourse is substituted for it and destroys the singularity of life and spiritual beings.

The basis of forgiveness is realized in a society of beings totally present to one another. Since I am excluded from the unique privilege of your intimacy, if I recognize my wrongs through you then I may be wronging the third one through my repentance of you. In a free society I am faced with the problem of alienating my will. The objective meaning of my action prevails over its intentional meaning. I am no longer a me properly speaking; I am at fault for something not reflected in my intentions. I am objectively guilty and my piety cannot purify me of it. The intersubjective relation of love is not the beginning of society, but its negation. Love is the I satisfied by the thou, grasping the other the justification of its being.

The presence of the other exhausts such a society.

The affective warmth of love is the fulfillment of the consciousness of that satisfaction, that contentment that fullness found outside the self, eccentric to it. The society of love is a society of solitudes, resisting universality. Its universality can be constructed only by time, by successive infidelities, by the change of friends. This is the love of one’s neighbor, determined by chance proximity, and, consequently, a love of one being to the detriment of another; always privilege, even if it is not preference. The morality of respect presupposes love. Love blinds respect which, impossible without blindness with regard to the third party, is but a pious intention oblivious to real evil.

The love that contemporary religious thought, cleared of magical notions, has prompted to the rank of the essential situation of religious existence, does not contain social reality. The real thou is not the loved one, he presents himself in another situation. The crisis of religion in contemporary social life stems rather from the awareness that society goes beyond love, that a third party listens, wounded to the amorous dialogue, and that with regard to himself, the society of religion is wrong.

Thus, the crisis of religion results from the impossibility of isolating oneself with God and forgetting all those who remain outside the amorous dialogue. The true dialogue is elsewhere. God is the fixed point exterior to society, fro which the Law would come: nowise an allegorical personification of my moral consciousness. Is there moral consciousness before we? Only unimpeachable witness, inserting himself between us, making our private clandenstinsity public with his speech, a demanding mediator between one man and another, is face to face, is thou. God could not be God without being that interlocutor. Earthly love invites us to take that radical turn towards third parties who remain outside of love.

Because dialogue cannot resemble the true intimate society, and it is not the emotion of love that constitutes it, Law takes precedence over dialogue, making man a political being.

We can no longer speak not because we do not know our interlocutor, but because the we can no longer take his words seriously, for his interiority is purely epiphenomenal.

What we must bring out then is the ontological status of the I as the third party affords us to glimpse it. In the current society of love the I reaches out to the thou in pure respect but is detached from the third party, and that transforms us into a singularization of the concept of man, an individual subject to an impersonal reason. A third way emerges which we can understand the totality as a totality of me’s, at once without conceptual unity and in relationship with one another.

But injustice entails a metaphysical paradox – it can only be directed toward a free being who does not lay himself open to violence. My will always finds itself at the mercy of an outside will. Injustice is the basis of the totality yet for one to understand the basis of the injustice they perpetrate against the totality, hence their inherent complicity in the injustice, a new situation is required. Justice, or the realization of injustice must come from without, it must come through history. History forms a universal application of morality to determine justice. Hence, all thinking about justice is inherently rational. The work of the will is justice, not a subconscious activity, or based in poetic thought, rather justice emerges through reflection on oneself. Since all thought has really been poetic, i.e. not dependent on principle, and focused on pure doing, a clear appraisal of justice demands the abolition of myth.

Yet, Levinas is not positing post-religiousness, rather that the diverse myths from the monotheistic traditions have worked wonders on the modern ability to grasp and apprehend moral consciousness and justice. The question is rather, where is the origin of justice to be located to best serve its utilitarian ends? Besides, the movement of anti-enlightenment strategies employed their critique of myth and dealt with injustice based on language. Language is though merely a fixed point, and does not instruct the truth of a being and a beings relation to violence, or injustice – that being is affirmed in faith. Language can bring the person to bear on the interlocutor, and force the articulation and responsibility of the person in assessing justice or being faced with the question of justice. Language employs the concepts but its inevitable problem is its transcendence of the other. The other is invoked and becomes through language, as he is in relation only to me. Language makes the other a being beyond all attributes, and he is categorized as a being in relation to all other beings in the subject’s totality.

Levinas’ profound discovery is that this speech about the other is still a mode of violence. The entire system which is par excellence of this model of language with the other is psychoanalysis. Psychoanalysis subordinates thought to a system that participants must encompass – so that the sense of a truth (of justice in this case) is not in the realized intention of the thought, but in the ontological event of which that truth is but an epiphenomenon.

Since it is not through psychoanalysis that I can dominate the totality from which I am a part, it is by encountering a being who is not in the system, a transcendent being…