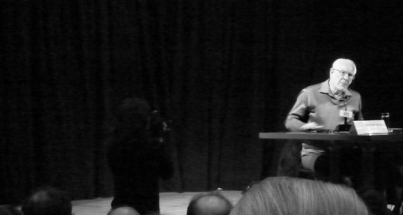 In an essay I am writing on Badiou and emancipatory politics, the question as to why Badiou begins his philosophical project with the subject has come up. Why is it that the subject animates his first major foray into philosophy, and why has Badiou continually returned to the subject? For example, his affirmative dialectics against Hegel is re-formulated precisely because of the subject – yes there is the event, but it seems that Badiuo’s real originality lies in the subject first. In Theory of the Subject, we get a different type of philosophy from his later work. Here philosophy is still sutured onto politics, and one that is still wrestling with the Maoism of destruction and the Mallarmeian dialectic of lack. In this early text, Badiou lays down a wager that guides his philosophy – like a throwing down of the gauntlet that one must continually justify over and over. This almost makes it a sort of intuitionist move, one that is grounded in a type of courage.

Badiou’s wager is that we can think a new type of subject in philosophy, one that is not a universal figure, coextensive with structure, but an exceptional emergence that is spurned on by a truth event. Of course the idea of truth and being would come later, but in a way, so would the subject, or at least, the subject would remain. The subject is what Badiou has turned to in his re-formulation of the dialectic and we might say that it is the central thought of his work.

What caused Badiou to focus on the subject? Much of it was out of a debate that Zizek had with Jacques Alain-Miller over his article, ‘La Suture: Éléments de la logique du signifiant’ for which a great synopsis is provided here. To greatly reduce the topic, the questions both Miller and Badiou faced was around the placement of the signifier in the realm of ideology and in science. They turned to mathematics to develop a complex set of arguments which we will explore below. What resulted was nothing less than the future of the Lacanian field.

At the time, Badiou referred to this article by Miller as the ‘greatest piece of work a Lacanian had ever written besides Lacan.’ Badiou’s argument in his response, ‘Mark and Lack‘ is clearly something that set him apart from Lacan, Althusser and Sartre and in a way, it opened a light at the end of his own tunnel. I won’t summarize this difficult essay here, except to say that in it we find the basis for Badiou’s movement away from the Lacanian position of lack of the subject and a new direction for his eventual mathematical approach to philosophy and logic.

In his debate with Miller, we also find the origin of Badiou’s debate with Zizek that would appear almost 40 years later over the human animal and the death drive, in essence, we find the origin of Badiou’s major split with Lacan, a split that Badiou is still forced to confront today.  Miller’s evocation of a non-identical and thus non-substitutable thing (i.e. a subject) is thus ‘foreclosed’ here in advance, ‘without appeal or mark.’ The key break that Badiou makes is ultimately in terms of the way that psychoanlaysis’ idea of the subject has nothing to say in any way outside of ideology. Here I will quote a long quote from Les Cahiers pour l’Analyse:

Whereas science ‘relates only to itself’, such that ‘no signifying order can envelop the strata of its discourse’, Badiou (again following Althusser) defines ‘philosophy’ as ‘the ideological region specializing in science, the one charged with effacing the break by displaying the scientific signifier as a regional paradigm of the signifier-in-itself. This is Plato’s relation to Eudoxus, Leibniz’s relation to Leibniz, Kant’s relation to Newton, Husserl’s relation to Bolzano and Frege, and perhaps Lacan’s relation to Mathematical Logic’ (163). Philosophy is thus constitutively committed to an impossible task. It seeks ‘to mark, within its own order, the scientific signifier as a total space. But science, indefinitely stratified, multiple foreclosure, difference of differences, cannot receive this mark. The multiplicity of its orders is irreducible: that which, in philosophy, declares itself science, is invariably the lack of science. That which philosophy lacks, and that to which it is sutured, is its very object (science), which is nevertheless marked within the former by the place it will never come to occupy.’

This logical articulation of mark and lack then allows Badiou, very neatly, to return to Miller’s conception of the subject (the subject as lack of self-identity) and use it to confirm his own characterisation of the relation between science and philosophy. He thereby ‘claim[s], in all rigour, that science is the Subject of philosophy, and this precisely because there is no Subject of science’ (163). Purged of any reference to a subject, science i.e. mathematics remains an austere ‘archi-theatre of writing’, the articulation of marks, traces, and traces of traces ‘indefinitely substituted for one another in the complication of their entangled errancy’. In terms reminiscent not only of Mallarmé, Blanchot and Foucault, but also of the Derrida whose reflections on arche-writing had shaped most of the fourth volume of the Cahiers (CpA 4.1), science here prescribes a signifying movement in which ‘we never risk encountering the detestable figure of Man’ (164), no more than God, Spirit or any other figure of the subject.

This lack of a subject in science, i.e. this radical lack of any lack, persists as the eternal ‘torment’ of philosophy. An ideological practice, philosophy is the endlessly futile effort to locate a subject (be it logos, God, man, speech…) at the very point, indicated by science, where every figure of the subject is proscribed in advance. ‘Through science we learn that there is something un-sutured; something foreclosed, in which even lack is not lacking. By trying to show us the contrary, in the figure of Being gnawing at itself, haunted by the mark of non-being, philosophy exhausts itself trying to keep alive its supreme and specific product: God or Man, depending on the case’ (163).

It is interesting to note that we can switch science for philosophy, which becomes later that which is not sutured to any particular field: love, art, science, or politics. It is also significant that in this debate Badiou develops a truth event for which the subject can remain in fidelity to this vision in a way because it is the subject is a point that he has had to defend, it is a sort of starting point, a break from his masters.

If you’re a philosopher working at the beginning of your career, what’s your wager?

One Reply to “Badiou’s Wager”