The best place to start with Is Oedipus Online? is to look at the intersubjective turn, i.e. that all desire is the desire of the other and that the overarching question asked in the face of desire is “what does society want from me?”

And since the Lacanian unconscious is like a language, each word and statement is a knot of meaning that forms itself into the desire system as like a ring in another ring ad infinity. So our desire is like a necklace of rings inside of another necklace of rings, (the other’s desire) hence the use of fractal expansion of language down to the base of the desire system. Not only is our desire caught in a fractal spin with other people intersubjectively, it is also intrasubjectively – i.e. the unconscious is a complex weaving of subjectivity, that in a fractal parallax, intersubjective language is structured by and like the unconscious and they play off one another vice versa. Spin in three dimensions, four if you count Einstein’s time dimension, in which multiple iterations of speech unfold. This signifying chain in its turn structures and exemplifies language. Language in turn structures and exemplifies the unconscious. The unconscious in turn signifies the split psyche. The split psyche in turn exemplifies the subject, and the subject in turn structures and exemplifies the intersubjective relation. The intersubjective relation determines the social fabric.

This structural set up of language makes the Lacanian signifying chain a more digestible metaphor for desire. From this we also grasp how the world of analogy, metaphor and allegory are really the only devices available. Indeed to understand the notion of human subjectivity Lacan employs his most famous metaphor that “a signifier is a subject for another signifier” or, a demand for love or recognition is addressed to an object who/that never fully responds, which is similar to the “return to sender” concept, that desire, as the left over of demand over need is the left over, that motivates the ongoing power of desire, which keeps the system of language on its tracks – keeps us in motion. 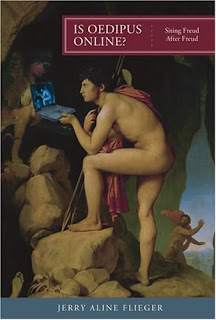 Language is the world and we cannot understand the codes of any two systems independently according to Wittgenstein. Manuel De Landa, dystopian techno author, argues that inherent in each website of the “meshwork” of various toplogical variances lies a certain extremism inflected by positive and negative, that each site is simultaneously technophilia and technophodia, dystopian and utopian depending on whether that node is imbued with an expanded sense of human possibility or a sense of nostalgia about the presumed loss of human values in a posthuman world – depending on one’s perspective. Or take Virilio’s statement that the more informed one is, the more the desert of the world extends around her/him.

Is Oedipus Online? makes an excellent Parallax connection between emerging systems theory / chaos theory / fractal geometry and Lacanian psychoanalysis, that the Internet itself is a psychosomatic topology of hitches and slips in a net of intersubjective desire, a knotty field that operates as a grand metaphor of desire itself.

The fact that 8,000 people get online for the first time each day puts a legitimate global perspective to our need to classify this phenomenon, is it in terms of identification, projection and intersubjective desire? Lacan’s neo-Freudian network is a nodal poetics of emergence which has great literary semblance with the Internet, however, its more important to notice the trends of what we are constructing via discourse in society itself.

In A Thousand Plateaus, Deleuze and Guattari’s continuation of the Anti-Oedipsu, every interaction of society functions as an abstract machine that spits out a subjectivity that are determined by the conditions we shape. The central question of the Anti-Oedipus is not what does desire mean but how does it work, how does it function and structure society by answering the Freudian version of the Oedipus myth. Oedipus, who faces the postmodern “opacity of the other” in cyberspace, is he able to gain the secret of humanity in the face of humanity losing its opacity and mystery as such.

Oedipus is then an abstract machine, not a role model. Oedipus’ struggle is in the automatism of the real. Oedipus was displaced from the truth of the oracle by his too-literal reading of it, making his affection to the object of knowledge infinitely regressive. The Oedipus of the post-symbolic order is a spectral figure inhabited by a blinded “knot-it-all” even though he sees nothing and understands nothing. Why? Largely because the subject of cyberspace has lost his opacity of the other, he has lost the mystery of the other. For Deleuze, there are only resistances and machines. To be anti-Oedipus is to be pro desire plain and simple, i.e. to secretly advocate a recall of the symbolic order to save-face.

Who is Oedipus online?

• Psychoanalysis markets and does not invent Oedipus.
• Oedipus is a Lacanian caught up in the trinity of Lack, Law and Signifier.
• He kills our capacity for becoming animal.
• He is a despotic kill-joy, and he is everywhere, i.e. society is the stronghold for Oedipus.

The dream induced by the cyberspace reality is severed in a viscous eternal recurrence of the same, or what Baudrillard refers to as the simulacra of the blurring between the three levels: the real, fantasy and desire. Cyberspace causes a rupture between the real and fantasy which causes us to be post humans due to a lack of signifying within our others, as in the other becomes stripped of her mystery, that we determine all that we need to know through the blurring and loss of mystery itself. In this case we cannot present absences in cyberspace; similar to how the unconscious cannot say “no.” The dream of cyberspace only presents visible images. The unconscious (in traditional Freudian terms) is followed by absence of contradiction. Cyberspace neo-reality is not an either/or, but rather an “inclusive injunction.” Inconsistent terms may coexist based on extra “or” that creates a paradoxical emblem of separation and inclusion simultaneously.