In a late capitalist world with our lives constantly bombarded by activity, interpassivity arises as a mode of fetishism that structures the symbolic space of our beliefs systems. An environment of constant activity results in what Lacan refers to as the “over-burdened demand to enjoy,” a build up of pressure from this demand causes the subject to delegate a level of passivity onto the scene of hyperactivity. Zizek points out in many places, particularly in his text On Belief how this “externalization of belief,” or interpassivity belongs to the realm of the symbolic, and enjoyment belongs to the realm of the real. Why? Because enjoyment can never reach homeostasis in the rush of activity and flux, enjoyment remains the object petit a, caught in an infinite tension around the object of desire, never reaching fulfillment, thus it remains part of the dimension of the real. 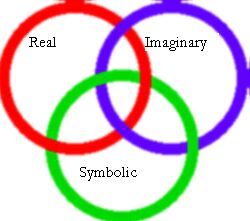 The clearest account of the Lacanian symbolic register is the example of Woody Allen’s public divorce with Mia Farrow. Allen is said to have dealt with the media in the same hyperactive, idiosyncratic ways that the characters in his films. A traditional psychoanalytic reading of this occurrence would argue that Woody Allen’s actions are merely repressed character traits of his own self put down onto the big screen, and then reappearing as a result of a psychical and emotional breakdown. The Lacanian reading would argue something different, that Allen’s incorporation of his symbolic behavior patterns from symbolic art is real life as such. The Lacanian subject is deprived of that which it believes to be the most intimate part of himself, and this happens in the realm of the symbolic. The symbolic is, after all “the only dimension that cures.”

What are the consequences of interpassivity on our own idea of subjectivity? Zizek claims that as interpassive subjects we are ambivalent and unsure to what extent we are able to give up part of our subjectivity in the required transfer with the other. Of course there are many different sorts of transfers of belief onto an other, the most common examples Zizek sites are that of canned laughter on television – an example that he gets from Lacan’s reading of Antigone and the role of the chorus in ancient Greek tragedies. In ancient Greek tragedies the Chorus functions similar to how canned laughter functions on television sitcoms, the Chorus functioned as a sort of interpassivity itself, doing the work for the audience, establishing the way in which to respond to the play.

Zizek’s theory of interpassivity is from Hegel but Sartre also discussed passivity, what Zizek does is add a Lacanian twists. He defines interpassivity as “believing or enjoying through the other.” Interpassivity is the process, or mode of externalizing one’s beliefs onto an other, wherein one doesn’t merely believe through the other, but belief itself functions like a defense mechanism. Zizek frequently compares subjectivation to interpassivity to a wide range of examples from religous rituals such as Buddhist prayer flags,to the oft cited example of the Atheist scientist’s use of the mezuzah, who when asked why he still has it on his entryway to his fome even though he does not believe in God responds, “I have it there because I was told that it works even if you don’t believe.” The view of Zizek’s conception of religion is rooted in Feurbach who believed that religion is an externalized part of our own subjectivity. The main difference here is that interpassivity is a distinctly modern iteration of the emergence of “praxis” onto the scene of philosophy a la Marx.

Where does Zizek’s critique of ideology come into play in the realm of interpassivity? Ideology can be understood as the stand in for impossible real of externalized belief. Thus, ideology is the process of taking externalized belief as real, when it is in fact an externalized part of our consciousness, or subjectivity. The real will always resist reification and hypostatization. Seeing ideology as a form of fetishism is the very structure of all reality because fantasy relations inhabit all reality. Externalized belief itself is a form of reality that we have difficulty time disavowing and delegating to an other, as mentioned above, the interpassive transfer of belief onto an other creates a superego injunction of guilt, similar to that of the liberal injunction to ‘know my neighbor as thyself.’

The interpassive subject feels depleted and unable to contribute to the norms of social production and suffers from the hyperactive mental fatigue. Interactive life presents a superego injunction that cannot ever be fulfilled. The way to regain autonomy, or to shrug off the hyperactivity is to reflect on the delegation of enjoyment onto others. Start by affirming what we cannot affirm in the abyss of the other’s impenetrable desire.