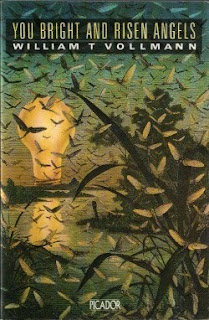 Vollman’s “You Bright and Risen Angels” is a tender and volatile trek through 100 years of technology in America. The story is an unfolding of the authors search for the muse, for voice, for a palatable subject, set amidst a dystopian future of computer writing, and the angels are hypertrophied subjects of twentieth century calamities, enveloped by a sort of data processing, totalitarian ordering of the world. The book is told in a rush of meta fiction and unravels in comic book imagery.

Set in a sort of triple phalanx situated by the author, (who has nearly a dozen extension characters) Big George, the sort of super ego in the machine, (an excellent repeating parody, so widel applicalble to society, the enemy of the author, God, etc.) and Bug, the quasi post modern anti hero. Most of the story revolves around the Society of Daniel, (really a sounding board for a patriarchal mockery of advanced education in America) is the intelligentsia behind the invention of electricity who wager a planetary war. The plot intentionally convolutes itself throughout but follows a very familiar emotional turbulence that makes you stop and take a deep breath, bite your teeth real hard and sigh out and groan out loud so your girlfriend can hear you, but you won’t be able to tell her about it. YBARA for its sheer length and readability alone deserves criticism and theory that is broad and open, honest.

Vollman allegorizes a world gone chaotic and overwhelmed by ideology by situating major upheavals of the twentieth century into the world of books. Indeed YBARA is Vollman at his most interesting because it is before his international messianic escapades – and is completely a book devoid of experience. The book is an outright violent attack against the intellectual disease of America. YBARA is also a sort of rite of passage for the confluence of a swirling book worm imagination mixed with a loss of the ability to corral a centered hero, subject or character into the artists control.

The real events of the author, his heart getting broken, going to Afghanistan, etc. occur very slowly amidst the fluxing world of ideology and chaos, which to me represents the oceanic flow of influence, indeed what Harold Bloom has called the anxiety of influence. Each of the characters is entwined in one another’s desire complexes but their rational abilities of communication and negotiation with one another have been severely hampered. To me this is a resurrection of the Brecthian ‘invented double,’ a commentary on identity formation (a superstructure Marxist view, but a good one) that modern man in an ideological situation, to sap the onslaught of tragedy invents an empirico-transcedental double. Vollman’s interest in people is under moments of decision making. As such, the inevitable outcome is posited to have the following conditions available: you follow the invented double to a state of tragedy/comedy, with a combination of both original self and invented double, a continuation in the truest dialectical sense of continuation occurs, wherre your antithesis in this case, (your invented double) with your original self and the situation being the thesis and the synthesis: disaster…

But to me this is the Lacanian view of deisre through and through – you have to renounce what you want objectively in order to reach catharsis with your original or let’s be Emersonian and say Universal self. The Lacanian notion of desire is based on a inherent alienation, also wrought through a post symbolic structure system devoid of interacting with subjective reality effectively. What you want is after all inherently alienated from you, so if you renounce your desire to want it, through the renunciation you have mastered your desire and can de-objectivize your neurotic complex and can position your desirte towards that goal, i.e. it is now more attainable.

Most commentary I can find on YBARA or on similar genres of meta fiction have been largely a let down for me. We can explore more of Pynchon and heirs, et al later, for they keep the game rolling and I thank them highly for that and for their patience and for keeping their heads down.

Seeking to place the authors struggle to assert autonomy amidst the upturned ideological driven world seems to me as such a cop-out for a happy ending, and furthermore is not the most interesting aspect to the genre or to this novel in particular. Of course the author is seeking to assert a centered position but hegemony is not the issue here. The real issue I think is the notion of data writing and the anxiety of influence.

Take the character Frank, while Frank is sort of king of the resistance (which is a parody on political resistance, representing resistance to the influence of other writers and thinkers) Frank uses his “City Lights” book bag to blow up Bugs and continually suffers from being misunderstood for his big heart and good deeds. While in Frank you see the author unfold brilliantly…