The Ship of Fools was a spiritual source for English bay towns and Spanish sea ports and indeed a source of majesty and imagination for both Shakespeare and Cervantes. Imagine the arrival of a ship led by degenerate lepers, homosexuals, poverty stricken heathens and plague infected subjects (without supervision by authorities) into the sea port community. 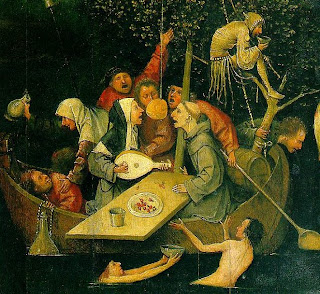 The notion of banishment and total castration was made possible by the emergence of a rational ordering of society in conjunction with the advent of the bubonic plague. Stripping the landed Feudal caste system of its hold over European society involved the emergence of a specific discourse on planning, a rationale of how to separate subjects in a kingdom.

The creation of this distinct Bourgeois ethic was also based around a justification for the new ordering of society in the emerging capitalist world; formed around the need for the expulsion of a broad category of what were labelled at the time usually as “mad” subjects. The discourse was founded on a medico-political discourse which sought to control the emerging lines of the new class system and to rationalize the emerging structure according to the planning community discourse. The discourse was rooted in enlightenment thought, and remember, it took till well after the French revolution to transpire before the idea of correction, rehabilitation and reform became the standard of dealing with the mad.

The categorization of a wide swath of members as “mad” was based on a collective fear rooted in the western imagination that had strong precedent (since Hellenic culture) in identitifcation with otherness based on disease or difference. In the SOF example, the way identification had become extremetized. The expulsion of the mad in such an awkward and dramatic way had actually represents the European mind casting itself away from its own source of truth.

This break, rupture, scission would haunt the citizen in their dreams, enliven the artist. Truth based in the confines of reason had its only source of liberation in madness; to break with reason is the very definition of hysteria. Yet, for the first time, capitalism created a system of change and mobility that broadened the category of madness, which represents the essence of the opening of freedom for social mobility because now anyone could be branded an outcast: (Jews, lepers, schizophrenics, lower class subjects, women, prostitutes, men unable to perform labor, etc.). The advent of a state based on perpetual and irrational fear/ fascination has a strong analogue to the state that we live in now: in the totalitarian state you are required to be happy.

In the emerging post-renaissance capitalist world order, you’re potential to be considered mad was always imminent and imposed arbitrarily, which made the concept of madness so visceral and real to all subjects. Our collective memory of madness will always be associated with water. The specter of the SOF docking at harbor has affected the European psyche to the extent that psychoanalysts of dreams such as Banswinger and even Foucault in his brilliant erudition have claimed the SOF has implanted a symbolic genetic code.

The specter of the SOF entering harbor containis the genetic code of our dreams.
Madness has since remained the germ of creative activity. To access truth involves a deep sensibility with the inverted side of the rational social order. The western-liberal tradition’s most revered thinkers especially of the twentieth century understood the dependency that madness had not only upon their own subjective understanding but that of the power that madness has on societies understanding of truth.

Nietzsche’s final four years were plagued by utter oblivion as far as his contribution to the enlightenment project, of course that work has resonances of profound truth and even up to the moment of the eternal return, which was ushered in with such contentment and finality, as if he had literally attained the pinnacle of thought, the final thought, the only thought!

We find that Nietssche’s entire corpus might be that of a resolution of the tension between the two forces of reason and madness thinking.

The artist as madman, the artist in touch with the invisible forces of nature, as he who has understood the underbelly of the rational order is a nearly pervasive trait of the role of the transcendent artist or thinker since Nietzsche.