The Role of Justice and Ethics in Interfaith Dialogue (VIDEO)

I gave a talk down in Nashville recently with a group called the Family of Abraham, a multi-faith organization that formed in response to intense religious intolerance following the attempt to ban shariah law in Tennessee.  The local newspaper in Nashville, the Tennessean wrote a nice piece on the event, which you can read here, and see my lecture and a panel discussion afterwards in the video embedded below.

In this talk I claim that in order to effectively combat bigotry we need to understand that it is a form of violence that’s rooted in a lack of justice in society. To understand the way in which bigotry manifests, I rely on Zizek’s three types of violence (subjective, objective, and symbolic) and I locate bigotry as a form of objective violence, where we turn the Other into an object of hatred. Thus, I claim that bigotry is often a displaced form of violence that is tied to a lack of justice.  I claim that the tradition of ethics from the Abrahamic faiths as realized in Levinas’ philosophy helps us to understand a deeper logic that both traumatizes us and thus also problematizes our relations to Others, but also shows the radical level of connectivity that we have to Others at the pre-discruve level.

I also invoke what I call psychoanalysis’ ethics of impossible alterity and argue that this must be the standard for how we form relations across lines of difference.  I distill Lacan’s ethics of psychoanalysis down to the claim, apropos interfaith justice work that any true encounter with the Other is traumatic because if it is truly authentic, I am unable to be put back into my position of self-centeredness – even though that might be what I desire.  There is always a gap separating me from the Other when I discover the Other in their real state or condition. 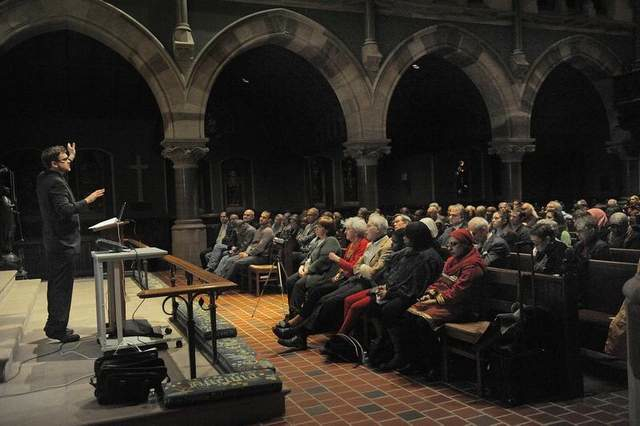 This form of ethics shows us that when we encounter the Other most authentically, it is not necessarily discovered through learning about the others scripture, or their morality, or even their faith – but it is discovered when the other presents us with a demand that we can’t adequately fulfill.

By becoming more fluent with these ethical streams of thought, I try to offer a model of understanding the Other that tackles justice, and does not see unity in diversity as an end in itself, but a model of interfaith justice that goes beyond some of the short comings of multicultural tolerance.

Breaking the Cycle: Faith Communities and the Transformation of Bigotry