Apostles of the Real – Terry Eagleton’s “Trouble with Strangers” 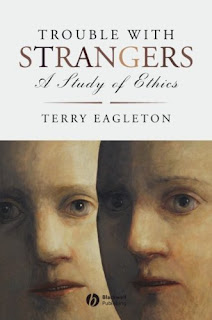 St. Paul regards virtue as emanating from a source of spontaneous goodness, where “the law” ought to be “inscribed onto the heart rather than codified onto tablets of stone.” This Pauline conception of the Law is much like Lacan’s symbolic realm, yet it’s symbolic system is one that orients the Christian community towards the good without constituting a good in itself.

Much like Kantian ethics, the Pauline moral law commands that good in itself be practiced, not good that is simply to be commended. Kant and St. Paul remain an iconoclastic to the moral law, as Terry Eagleton in Problems with Strangers: A Study of Ethics points out that Kantian/Pauline ethics classifies only acts under the “duty of the law” as relevant to morality. Kant is similar to Lacan in his notion of the unconscious, which to Kant follows laws; the exception being that Kant argued that one could dissociate themselves from “pathological” impulses or desires and orient oneself solely to the categorical imperative. Lacan’s view of course is that pathological desires and impulses are out of control, preventing any assertion of an overarching moral law.

Unlike Aristotle in the Nicomachean Ethics, Kant was weary of ethics that depended on motive. To be totally free is to disentangle oneself from all pathological hang-ups and dedicate oneself to the moral law. This yearning to find a non-pathological way out of the symbolic matrices is what Freud would call the superego, and as Eagleton points out, this may be where Freud indeed developed the superego. Since Kant moves his ethics entirely into what Lacan would deem the symbolic realm, subjects are unable to back up their morality with something exterior: God, nature, etc. Kant’s aversion to any anthropological will is after all a pathological striving, hence, we must move our morality out of the realm of dependency on ideology (even though Kant may not have deemed this ideology).

Morality has nothing to do with judging one another from an introspective process but is rather judged externally, in what Lacan would call the symbolic space of a universal subject. Thus, to Kant, we are most ourselves when we behave as if we could be anyone. Yet, it is only when I split myself in two and see myself from the vantage point of the stranger that I can enter into true selfhood. In an ironic sense, Kant set a very low value on friendship since one can attend to oneself better than anyone could attend to anyone else. The ground of ones desire for the others good is rooted in this morality system.

The British benevolentists (Adam Smith and Francis Hutchenson) advocate something very similar to Kant’s ethical maxim but they remain only in the realm of the imaginary, a completely interior conception of the others feelings and sentiments. To orient oneself to a universal moral feeling or sentiment known to pure intuition of in some ways a priori truth, is to participate in the symbolic realm, even though their philosophy remains purely to the imaginary. To Kierkegaard, it is only through being exposed to despair that we come into grace with God. Faith is not the immediate impulse of the heart but it is the paradox of existence. There is no absolute road from the heart’s sentiments to ethical absolutes.

Only by submitting to the law of superego can one find a place in the symbolic order. To submit to the symbolic order is to enter a kind of exile. Our world is mediated by the signifier, not like the imaginary, which is mediated by immediacy. It is the signifier that gives birth to man, not the other way around. There is no other to the other, there is no terrain to which the whole thing may be viewed. The symbolic order functions like a fiction – which is the space that Zizek deems “ideology.” Examples of symbolic ideology abound and can most generally be associated with a collective denial to maintain social appearances or maintain what Zizek refers to as symbolic efficiency.

Even though Lacan and Zizek deny the existence of a signifier, or single mediating force that maintains the semblance of symbolic reality, hence their non being of the subject, Eagleton brings up several “apostles of the real” – Spinoza, Nietzsche, Levinas, Derrida, and Badiou. In Spinoza’s ethics, for example, the signifier is nature, and his ethics represents the first external critique of subjectivity that analyzes subjects as isolated beings. To Spinoza, freedom is possible because we are not aware of the causes of our actions. Freedom is not action but it is self-determination. God is not a transcendent being but is imminent to nature; God is the entire world.

Unlike Hutchenson and Smith, where experience is the source of all truth, Spinoza belongs to Lacan, Nietzsche, Levi-Strauss and Schopenhauer who collectively see in experience a certain delusion. Only by repressing, forgetting, mystifying, etc. does our true nature develop and we become the subjects we are.

The Reign of the Real:

Desire is like the wiley coyote always chasing its own tail, without a target beyond itself. Reality is a place of shelter from the impenetrable real, a sort of “Soho of the mind” as Eagleton puts it, where as in a dream we approach the real of our desire. This is why Lacan stood so firmly to the power of dreams to revealing the real of our desire. The real is also a sort of foreign body lodged within side us.

There are three forms of the real

1. The lamella – or the formless unarticulable thing that persists, this is like the excess of desire that remains and can’t be undone.
2. There is the scientific real that functions like a formula that expresses natures automatic and senseless functioning.
3. The barely perceptible difference that transubstantiates the scientific from the excess of the real.

Object small a in this matrix is much like the art object in an anamorphosis painting, such as The Ambassadors, where a totally foreign object appears for no apparent reason, affecting the entire experience of viewing the painting. The slight view of the object from the perspective of one’s own desires brings to light a new reality – but is it an important reality?

The object small a is the inscription of the subject in the field of objects, in the guise of a blotch that takes shape only when the subjects desire gazes at an other. When it is distorted by the subject’s desire, the object small a inscribes itself onto the other. The most popular depiction of object a is the Ambassadors – where the distorted object is a skull – similarly, in Shakespeare’s Richard III – the lesson of the play is that Richard begins to see his kingship as a shadow of nothing, through his encounter of object small a. The subject himself is reduced to the void and is forced to look at the death object. But when seen from the perspective one’s desires, the object petit a takes on new meaning, as it strips the subject of symbolic meaning.

To Lacan, the real is the effect of the gaps and curvatures of symbolic space. So then reality is a heavy “thing” that exists in symbolic space. The real is that which resists being symbolized. The real trumps the imaginary as the self’s call to the absolute takes precedence over the universal. The outcome of this ethics has political implications – there is no utopian possibility where men see one another as in the imaginary mirror. “The reality of the other is never a fact for me, only a possibility.” To Kierkegaard, the abstract universal individual is a bourgeois creation that must be rejected. At best, society should aspire to the negative unity of the mutual reciprocity of individuals. But that reciprocity is in no way constitutive of their being.

While the majority of continental philosophers since Kant have negated the possibility of a symbolic field that resembles what the sentimentalists claimed was possible with orientation to a subjective state that is ultimately universal by connection with moral feelings. Hegel took this notion post Kant into one of reified public reason, as did Marx. Human subjects must develop their faith from a reified public reason that does not find its mirror image or fulfillment.

Nietzsche – questions the entire structure of morality proper and connects it with power. Morality is essentially ideology, just as it is for Marx. Similar to Kant, morality can only be explained outside of itself, as a function not of spirit but of nature and life, biology and anthropology, in essence in body, not in spirit.

There are no moral ideas at the core of all moral ideas is a struggle fought like all other things are fought for, and the only way out of the deadlock is to redefine ones conception of the will. Thus, one must destroy morality in order to liberate life. Freedom is a question of hugging ones chains.

The main lesson that Lacan offers in terms of coping with these problems of the “limitless of desire” is that there is no transitive way out of the deadlock, i.e. there is not other out there that can fulfill ones desire. There is a politically informed and bona fide “ethics of the real,” or what Zizek refers to as the “heroism of the lack.” Since desire is a sort of transcendence resisting all transitivity and pathological objects, desire can never be fulfilled, but it can be understood and the supplementa excess, fetish disavowal or hidden ideology that underpins and supports the delusion of the desire can be identified. Yet, much like Kant’s categorical imperative, to fulfill the law of desire requires a certain blind allegiance to your own desire. The subject of the real becomes a subject precisely by harkening to that which is more than itself, and in the symbolic, to that which is completely autonomous, and to the imaginary, to that which is outside of it. It is in the realm of the real that we see that psychoanalysis is very much like theology and that it requires a certain faith to maintain an ethics grounded in allegiance to one’s self above all else.