The ground breaking film KIDS by Larry Clark chronicles a day in the life of an interracial, inner city group of youth caught up in illicit sex and drug use, set amidst the peak of the urban AIDS crisis of the mid 1990s. 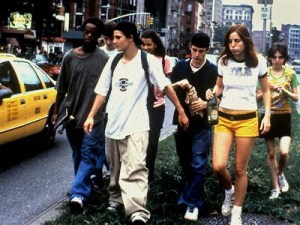 The film incorporates several motifs which inform critical race theory; chief among them is the idea of a declining narrative of white supremacy and the resultant white double consciousness that occurs in its vacuous wake. The film also reveals a new terrain of group identity formation which is no longer tied to the old modes of cultural and racial difference.

The process of group identity formation was paradoxical, as it lacked any clear racial modality to determine the levels of inclusion, group hierarchy and individual expression. As a result of this lack of a clear racial injunction, group identity was both homogeneous and heterogeneous. The collective group identity was homogenous because it enveloped racial difference as irrelevant, or as the determinant of group acceptance, and they were heterogeneous because they broadened the forms of racialized identities able to proliferate within the group.

Such a process of nonracialized group identity could only be made possible through the loss of relative autonomy in white supremacist narratives of power and domination over nonwhite others, especially blacks. Isolating this paradoxical group formation should be interpreted in the context of what Linda Martin Alcoff, in The Whiteness Question points out as the disintegration of white narratives as a result of liberation movements. The ubiquity of this relative decline in white supremacist modes of cultural identity and the declining plausibility of white supremacy results in a sort of psychic degradation, whereby positive identities are derailed (Alcoff, 221). In the absence of white supremacist identities, a shifting occurs, whereby new abject categories and collective identities are formed (Alcoff 206, 221).

The heterogeneous aspects of group identity formation embraced black cultural modes of expression: the incorporation of hip-hop, urban-black slang as the lingua franca, dress styles, etc. At the same time, a sort of reverse power was at play in the group’s identity formation, where racist slurs towards blacks were common, the group projected a sort of representative yet benign racism against black as a sign of weakness in terms of society.

Taken to another level, the black body was the locus of sensation and male sexual dominance and prowess, it was the premiere fucking machine, evidenced by the infatuation with the black male penis at the pool scene. The absence of the old modes of youth discipline and restrictions were gone. Even the old modes of cultural, racial and ethnic differentiation were no longer obeyed. These absences of clear family authority models were apparent: 15 year olds engaging in sex and drugs, visible class hierarchies were superfluous to the group, notice the irrelevance of the “upper class” house where the final party was held, contrasted with the general disregard for wealthy lifestyles or “bling” culture.

This vacuous space of nonracilized group identity formation resulted in a hybrid reconfiguration of inclusion, power and status based not on race but on a distorted white double consciousness of primal urges, consumption and sexual prowess. The main character Telly is progressively lionized by his male friends for his obsession with having sex with only virgins.

This sort of hyper-sexualized group identity was paradoxically based on a strict patriarchal-based conception of what would have 30 years previous been considered “free love.” Recall that gays were the only visibly excluded, when the group shouts obscenities to the “fags in the park”.

While the level of committed relationships was overturned for continual sleeping around for pure pleasure, even the females seemed to have internalized a patriarchal sense of sexual orientation, evidenced by the all girls talk about sex and the all boys talk about sex which had no difference in sexual innocence or levels of desire expressed.