A Case for Dialectical Materialism? Zizek’s Tarrying with the Negative 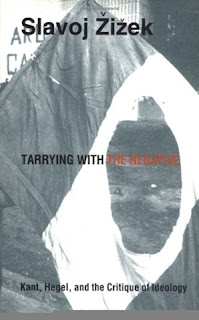 The strongest argument for a contemporary application of Hegel is Zizek’s Tarrying with the Negative. The treatment of the Logic of Essence within Tarrying with the Negative examines the evolution of “for-itself” to “in-itself,” extending from that, the relationship between an internal and an external that is always at odds, and how these theories of the dialectic apply to Marx’s radicalism of the proletariat, the master slave relationship, symbol study in art, and even to abstract mystical Heideggarian ontology of human essence.

Can a thing, in terms of the dialectic ever fully attain what Hegel called “restored essence?” If we accept the inherent contradiction basis of every process then we must gain a solid footing in relationship to this inevitable “short circuit.” If all essence is formed out of a reconciled notion – i.e. the form always combines with it’s opposite, well then in what way do we position our senses to this inevitability? Out of this, Zizek argues that a true Hegelian dialectic is actually impossible to achieve. Why?

Within every process of development there exists an inner possibility that is contrary to the actuality that is occurring. So, this means that all possibility will always externalize itself. Therefore, our reality brings the externality of the thing as raw objectivity. In a stage of objectivity the thing has not yet reached its notion. Heidegger’s metaphysics and ontology of human essence presupposed an antagonism between the external dominance of the thing – and the solution was that we must turn away from the external and deny all dominance in order to “let things be” – to restore essence, we must leave the field open for the full deployment of potentials. This positions the subject as perceiving that “something” exists in reality only in so far as its representation is filled out by the contingent, empirical content provided by intuition, (alone, which is where the Kantian “return to the senses” applies) only in so far as the subject is affected by senses.

How does this apply, to anything? In an intimate relationship the only real way to become aware of what you have is after it has been consecrated. The whole argument that true love is actually the most painful thing and the only way to reach harmonic love would be to sever the intensity of love and get married. The dialectic at work here is a failed encounter; the passage to for-itself (non chaotic love, marriage) happens by means of its loss. The antagonism between the in-itself (chaotic love) to (for-itself harmonic love) is a process between two grounds: both the inner essence and conditions of a thing (are its true nature) and the external circumstances are what render possible the realization of this essence.

The same process of and relationship between external and internal is at work in the artistic symbolical realm. Most symbols in films and movies exceed their own symbolic capacity – as in Jaws, Jaws cannot represent a symbol of America’s fear of the third world (as has been suggested by many, in particular Fidel Castro) because the shark would then consist of pure fear – an overload of meanings are immediately assigned to the shark. He represents now the destructiveness of capitalism, or of the impending destruction caused from nature, in a natural disaster etc. The shark ends up annulling the fears by occupying the space of the symbol qua fear, so the shark has rendered invisible the fear and is a non-symbol.

Applied to the dialectic of identity a certain stage of reflection on the “for-itself” process known as “absolute reflection.” In this stag all appearance (senses) are an elusive “surface” revealing a hidden necessity. Since there is always an unknown necessity, appearance is always of-itself. Hegel’s dialectic of identity concerns the “for-itself” transposing into its other in order to become itself, (which we discussed via Gadamer’s Truth and Method in the concept of cultural Bildung, or the ability of the educated person to switch their gaze to the world through an intersubjective transposition with an other that they have no solid ground in their own subjectivity and this enables a return to the for-itself – the birth of knowledge acquisition) however, there is always a split between subject and object in that transposition. This split of subject and object causes an utter unrest in absolute reflection because the reflection is not grounded i.e. the subject is not able to grasp the entire causal chain that has constituted her situation. Because absolute reflection is an unknown (Necessity) behind appearance, it is concealed. This concealment of identity leads to Lacan’s statement that, “there is no I, I feel that I exist but I do not. Each of us is a cross roads where things happen.” The Lacanian will is the will to joy, the will to joy that is infinitely deferred in myself as it is transposed into the other, or as Lacan would say, into “my other.”

The split between subject and object causes an absolute unrest, in the situation of absolute reflection both subject and object turn into their opposite. This is contingency. In its other, contingency becomes itself. The identity of one in the other is necessity. The search to ground the act of possibility is always an effort to transcend “empty presumption.” From this standpoint we gain an understanding of what Kant described as human freedom, which is: the only way to prove you can do something is to actually do it, which is clearly never attainable in the actor. Every attempt to realize freedom may fail and for this simple reason it is the basis of our evolution of understanding freedom.

The master (teacher) relishes in the pupils failure as a lesson, whereby he has to go through a automated course of understanding, and we can call this automated on the basis of the master’s intentional and controlled superimposition of his own experience onto the pupil. The goal being to connect both the suffering and plight of the master himself in subjective terms to the pupil in order to establish the pupil’s own validity in a transposition of the master’s subjective understanding of freedom.

What is dangerously flawed in this egocentric teaching style is not only its gendered bias application but also its barring of any genuine process of freedom development, both in the pupils consciousness and a dramatic stripping of the subjects (pupils) own actuality.

This is equivalent to the status of possibility versus actuality – what this system does is denigrates the actual empirical potential of the subject through its transposition into the intersubjective life-world of automated learning.
This is identical to the fathers rage, the moment he attacks with shouts and hollers he represents the opposite of his intended meaning which is blind impotent rage – any outward sign of evil (according to Kant is always in evolving towards good).
This is why the master is always an impostor, is always someone who, when he presents himself as human like the rest of us is able to wield the most potent power – only in his finite nature do we actually witness the inverse of what traditional role the master formerly occupied, absolute dominance.