Object Petit a and the Left

In Zizek’s Tarrying with the Negative, he compares how the American protestant “if it suffers it must be good” attitude to how popular culture has made Mohamed Ali into the “Greatest.” Zizek points out that this designation did not come from Ali’s toiling in the ring for 25 years, in fact Ali was only the “Greatest” after having battled Parkinson’s in retirement, because his life now represented the personification of “overcoming” adversity and obstacles upon the moment of his lighting of the torch in the 2000 Olympics. The obvious lesson here is instructive of the Protestant subconscious ethos of “if it suffers it must be good” and also, why was Ali not able to have reached achievement mid career? 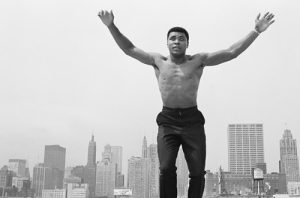 The view shared by much of atheist and New Age dogma is that we can migrate into bodies from hardware into software, which is a notion that requires a material anti-Judaism. In the post modern land that is seeking to abolish all limits, the Jews want to build their own nation-state. Indeed it is not only the New Age/atheists but there is also perhaps a much larger collective overcoming of limits ingrained in western culture that butts heads with the Jewish representation of a constant symbolic passage of the family, where we are seeking the elimination of sexual difference as the index of our link to a singular body, of immortality through cloning – our transformation from hardware into software.

Sam Harris’ defense of religion in western culture and identification of the new-atheists-pagans falls short on the side of practical application. Harris needs to extend these assumptions to the spiritual applications of an emerging and visible taxonomy of New Age sects. What Zizek calls the Digital-Gnostics, view reality as fully malleable, enabling us humans to migrate between a multitude of realities sustained only by infinite love. They believe that humanity is evolving into a transpersonal world of post-individualities due to a failure of the Big other, and that the death of symbolic order enables us to inhabit pure-spirit, and humanity is now able to enter a stage of ethereal realization of their no-self. To the digital-Gnostic, metaphysics must remain alive because metaphysics is so fundamentally different from the “real world,” that the escape from the real world is actually the unconscious achievement of the release of a fantasmatic Big-other. I would say to Harris that in this case: isn’t the digital-Gnostic not strikingly similar to the Fundamentalist?

In a radical, non-millenarian way, the Jewish allegiance to the state and the family maintain this fidelity to “the Law,” because they insist on the insurmountable finitude of humanity. As Lacan would say, this alleigance to the Law makes the state of Israel the object petit a that sustains the international order’s. The drive that sustains a desire according to Lacan operates in a curved space, it is non linear because it is continually caught in a repetitive movement around symbolic castration. Because the ultimate political act is found in Judaism, symbolic castration of the human family is wound up how to integrate the object petit a of the Jewish radical allegiance to the Law.

In many ways, the USA stands for the dissolution of all traditions. It is the myth-less embodiment of the problem of the global striving to abolish all limits. The USa is the global-mythical point of reference for the chaotic non-All of the USa. The notion of the Jews forming a super state is really the notion of the end of Judaism, which strips the object petit a symbol structure from it’s place in the Nazi and Fascist mind. In other words, we know the “evental” politics of Nazism actually depended on a precarious balance sustained only by infinite violence, i.e. continual eruptions of disorder to save the façade of pseudo order. The Lacanian object petit a for Nazism was the community which stood in its way towards implementation of “living room.” For the Jews, the object petit a, (Zizek argues) is the holocaust itself, as exemplified in the mission of Elie Weisel – we must never abolish the memory of collective horror, which prevents full participation in the global seeking of an abolishment of all limits.

Since capitalism can only overcome its constant revolutionizing by overcoming its own limit, what is the role left for emancipatory politics, and in this case for the problem of anti Semitism. The space of “symbolic torsion”, or where global capitalism allows political change to occur is really a world-less outcome. According to Hardt and Negri’s treatise of Leftist thought, Empire – capitalism is always becoming-Communistic. Since capitalism is no longer able to be solely defined in a Eurocentric model – and it is rather an abstract economico-symbolic machine, whose ontological dynamics undermine every stable frame of representation: what is usually a task to be performed by critico-political activity is already performed by capitalism itself.

The left’s major fault is whether what is called the “anti-Globalization movement” should continue the New Left’s activities, or whether there is an informed theoretical program attached to it? Contrasted to the liberal-gradualist model that seeks to create conditions for future equality via a pragmatic minded ethos that instructs us to live in the complexity of our current situation by encouraging a more equal world; I believe it is post-revolutionary leftists such as Herdt and Negri, Badiou and Jameson that embrace the “wait for the Messianic moment”, who are making the gravest mistake when it comes to “What is to Be Done?” Badiou’s denial of the pragmatic model is justified by asking, “what are we really doing but reifying to Empire what Empire already knows?” The negotiation and compromise model advocates, on the other hand, are to be faulted because they embrace an endless logic of prolongation. The notion of forcing an evental truth onto the subject as in Badiou’s “passion for the real,” – as a solution to this impasse we see that the postmodern truth constellation responds by prolongation, as in the Truth, democracy, and justice should remain to come. This leads to a further conceptual deadlock, to a notion that prevents the world realizing itself… this prevents proper theoretical engagement to the new anti-Globalization movement that needs equipment for sophisticated “cognitive mapping” which they have never fully attained.

Therefore the “politics of prescription” and Zizek’s “politics of subtraction” both depend on a stop gap of equality. Their view that the liberal-progressivist agenda as a form of radical terror based on equality – the notion that the only way to create evental politics is to allow truth to flourish in the economic sphere, which must come from outside of the state apparatus. Yet again, the Lacanian left has recently argued that Rawls’, A Theory of Justice (which is largely recognized as the magnum opus for the global liberal model of justice) leads to greater violence. This dead-lock of resistance, of revolution prevented, of the nothingness of the Left can be solved by a Zizekian Parallax. And I think we have to disagree with Badiou in his estimate that the negotiation, dialogue and discussion model only makes visible to Empire, what Empire already knows.

A Third Way Left must negate what Badiou refers to as this kind of “pseudo activity.” In the Badiouian sense then the republic is the space which prevents any engagement with specific issues, it is this area that falsely “equalizes” politics. For instance, when we deal with two socioeconomic interests, or variables, they can only be represented by the negation of their shared premise. This complete and utter dependence on the machine of the republic, is similar to Marx’s the Eighteenth Brumaire of Louis Bonaparte, where the republic was the only equalizing zone of political stability. Since any choice is a choice that is inherently transgressive to the law-code of western tolerant multiculturalist reasoning, the politics of place, and singularities of sites of resistance create a new world for theory to thrive.