The Society of the Spectacle is Guy Debord’s very challenging treatise and the strange, modern, non-manifesto, and overly-intellectual document of the Situationist School- an equally strange asemblage of anti-intellectuals and neo-punks who for some reason hail Debord as a savior to the critical left post Marx. 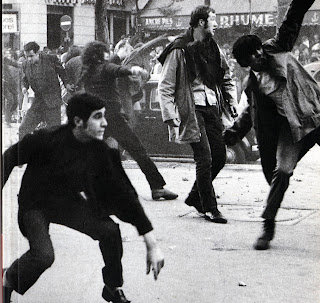 The Society of the Spectacle purports to be a critical appraisal of Hegelian and Marxian philosophy in a power-laden post capitalist landscape, Debord’s arguments actually end up becoming much more technical and elusive to a would be revolutionary following his dogma. Perhaps he forgot that Marx started out as a romantic poet and understood that his technical material needed to be laced with practical and prosaic anecdotes to humanize and universalize his calls for revoltuon.

The commodity fetishism is the centerpiece of all social relations. Vision is the primary sense affected whereas touch used to be. Workers are now treated as humans though their new roles are as consumers, cereating a battery of false consciousness. The spectacle is the commodities most general form. The spectacle is the pseudo use of social life. Society becomes capital’s portrait, while it is the only tangible objects of social life. The spectacle is pure unconscious which is the reason for its permanence. (This is in the same vein as Freud’s belief that any conscious reality will eventually be obliterated over time.)

Like modern society itself, the spectacle is divided and united. Division is presented as unity, while unity is portrayed as division. The by-products left are power and leisure, most tangible represented by the “stars.” The power to decide and the leisure to consume. Because none of these celestial activities are global, they offer not real choices. The individual who enters into the identifiable realm denounces all autonomy to the order of things, rejecting blind obedience. –the text is flawed because it has no linearity in its aphorisms.

The subject is the proletariat, once the bourgeois came to rule, he was put in the position to always be on the verge of discovering his own consciousness, yet never able to attain his own essence. History can only be the self production of the living. The subject as consciousness of its own activity is the new role of the proletariat. The proletariat is not content to seek the meaning of what is, but towards “the meaning of all separation” but in so doing, he affirms his own seperation from the world. Hegel’s work in essence sought understanding of the world through “its” culmination, transcended separation, but this was only in thought.

Hegel does not reflect on the process of the entire revolution, but only its concluding phase. Identifying the external movement of history had to be placated with an already existing project, that of “spirit.” Philosophy can no longer glorify its world without denying it. The problem of this thought is to say that when the proletariat has proven to discover its consciousness, it is negated by the philosopher. Marx’s notion that the science of history is the only way to usurp bourgeois power, needs reexamination due to its infection with bourgeois traits. The utopians within social history actually deny history…