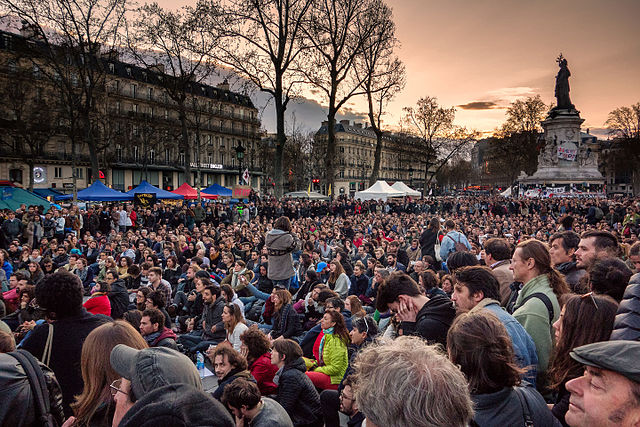 In his late Marxist work, Critique of Dialectical Reason, Sartre was pessimistic about revolutionary politics. He theorized the subject of history in the figure of the group in revolt, what he termed the ‘fused group’. The fused group, through their acts of negation (revolt), develop a new interior, untranscedable position. In a Lacanian sense, Sartre’s fused group is able to persist without the big Other. They have, as Sartre would say, dissolved the inert being of alienated social existence.

In the fused group, each member inhabits the role of what Sartre calls the third party, escaping the institutional inertia and transcending (Sartre’s words) ordinary social being. I read this as an ontological change which starts a new dialectic, what he calls the constituted dialectic based in a resurgence of a new knowledge of being. The dialectic that the fused group unleashes brings the subject back into the world, a move which was counter to the dominant dialectical materialism of his time which had ‘thrown man out of the picture’ where the world unfolds itself and by itself to no one (27). Re-constituting the dialectic is ultimately a radical individualist wager. Sartre’s existentialist individualism is apparent when he writes:

“On the level of ontology, the dialectic appears as the only type of relation which individuals, situated and constituted in a certain way, and on account of their very constitution, can establish among themselves” (37).

The whole, or totalizing act, of a particular agent within society becomes the means by which a new dialectic is established. The revolt establishes a ‘new totality’ as much as it breaks from dialectics as such. The individual in the world lives in a potential communal praxis, he/she is a member of a class, or what Sartre calls a series. The individual forms bonds of interiority with the social world around them (what Sartre calls ‘series arrangements’) which are completely passive, leaving social being in a position of alienation or ‘inert being’. Man is thrown into this inert social being and can only regain his humanity through acts of negation or revolt.

The social facts of man’s existence (scarcity, poverty, exploitation) are forces of material significance that objectify and alienate man but they are also what make man. Man only realizes himself through a transcendence of these material conditions. As Sartre remarks:

“One has the feeling that man only exists in flashes, in a savage discontinuity that is, ultimately, always absorbed into inertia and the law of separation. Collective action is the pure moment of revolt. Everything else is an expression of man’s inevitable inhumanity, which is passivity.”

It is at the point of what happens after the revolt that we can locate Sartre’s pessimism. While man finds meaning from moments of transcendence (or revolt) from the social materiality — he falls back onto an alterity where he is unable to escape from a master slave dialectic with the Other. Sartre’s pessimism comes about in the way that he theorizes the fraternity of the fused group. The fused group forms a temporary bond based on an oath with one another so as to avoid violence. The necessity of forming an oath is tied to the premise that each member of the political organization must protect one another from betrayal. Sartre fails to theorize a form of revolutionary fidelity to the rupture of the fused group. The collective fraternity is ephemeral, destined to disintegrate into a passivity of social being, facing the inevitability of being swallowed by the social entity.

What fuses the group in the revolutionary rupture is what Sartre calls a slogan. This is significant as prior to the turn to theoretical work on the way that the name (or slogan) cathects groups at the level of collective affects (Spinoza would present the core material for thinking this as would Lacan and later Sylvian Lazarus) Sartre argued that the fusion of the group around a slogan functions to re-direct the group’s authority towards a regulating third party. Fusion is the term of the name, which in the case of the French revolution was ‘To the Bastille!’

Fusion is a historical and revolutionary concept and not a political concept. The oath brings the fused group into an institution and is formed around the negative possibility that one of the members may cheat or break the fusion. The organizational process is therefore based on a fear of betrayal, which makes Sartre’s fraternal group into what he calls ‘a dictatorship of freedom’.

Sartre invokes quasi religious terminology in referring to the break with the series and the formation of the fused group, calling this break an ‘apocalypse’.  As we stated above, the break re-orientates the subjects in revolt towards the third party. The third party functions as a regulator of the group, making the fused group no longer alienated from the common object.

For both Sartre and the early Badiou of Theory of the Subject, praxis was formed around the logic of the masses in revolt. But as we saw above, Sartre remained pessimistic about the movement from protest to political organization, doubting the extent to which fraternal revolutionary agents can sustain revolutionary enthusiasm without falling back into what he terms ‘seriality’, or the inertia of institutional atomization. In Theory of the Subject, Badiou develops a theory of the masses in revolt through his use of the concept pf torsion which opens a thinking of loyalty to the name beyond the pessimist direction that Sartre takes it down, i.e. not trusting the movement from revolt to political organization.

Badiou remains heavily indebted to Sartre’s notion of the passivity of all social being in that for Badiou, the social is what Badiou calls the “neurosis of politics” (141). In fact, you could say that Badiou’s definition of the ruling class is that class that finds the law of the repeatable and then ‘guarantees the perennial conservation of the world’ (140). What the ruling class found is ‘society’ as such, a society that is structured around the law of desire and the pair of ‘perversion/neurosis.’ This is why Badiou says the social is the neurosis of politics. Against Lacan, Badiou will argue that what it means to become a subject in the analytic setting is far too much of a normalization of the neurotic subject.

Badiou is after a theory of the subject that cannot be inscribed into the splaced ground of repetition (ordinary social being) to use Sartre’s terminology. The process of revolt is to “make a symptom out of the old totality, and a total truth out of the symptom – out of the crisis” (144).

Ultimately, what Badiou will do is conflate the subject with the party around the notion of the torsion group. Badiou argues there is an internal correctness [justice] of the masses which is not present in the fused group. The figure of the masses are presented in two ways in Theory of the Subject: they are the being of history and they are the vanishing term endowed with causal power.

Everything hinges on the real. Everything relies on the disruption of repetition and the establishment of a new coherence. Torsion is what ‘interrupts the repetition’ – and this is what defines its dialectical status. It refuses to be swept back into the repetition of the whole, while you cannot pinpoint a primacy of practice, but you can pinpoint a torsion.

Badiou’s revision of Sartre’s fused group is a materialist revision: i.e. to assume that you have a subject in the immediacy of the revolt reeks of idealism as it does not formalize the new knowledge of the revolt at the level of being, but keeps it only at the Idea.