In this post, I want to share my experience in psychoanalysis. Some things have been truly surprising. Concepts that were once elusive become apparent in a way that is sudden and palpable. I won’t share too much about the specifics of my analyst or get into the details of the content of what we exchange in our sessions.

These learnings are highly subjective and my analysis should not be taken as universal lessons of psychoanalysis by any means. Because these things I am discovering are incredible to me, it only seems appropriate to begin with a quote from Freud:

“[Analysis] has accomplished its purpose if it gives the learner a firm conviction of the existence of the unconscious, if it enables him, when repressed material emerges, to perceive in himself things which would otherwise be incredible to him, and if it shows him a first sample of the technique which has proved to be the only effective one in analytic work.”
— Freud, ‘Finite and Infinite Analysis’

1. Names contain heavy symbolic weight. Do some homework on your name, both first and last. They are often the entry point for an enigmatic signifier. For me, there is a relation to the word truth and my last name that I am still working through.

2. Analysis really is about helping you to desire more freely. The most common starting point for someone going into analysis according to Bruce Fink in his essential introduction to clinical Lacanian analysis is that the person has lost the ability to desire how they want.

You discover different types of desire like curved forks in a road. Although I have been undergoing analysis for just three months, I am noticing that psychoanalysis is not about immersion into the das Ding of desire, but is more about forging a middle path through traumatic desire. In an important essay, the Six Paradigms of Jouissance, Miller states that the impossible real period from Lacan’s Ethics of Psychoanalysis seminar is the one in which jouissance is outside of the symbolic. He characterizes it as such:

“What is the thing? As a term, it is the Other of the Other. It lacks in the Other. Jouissance as the Thing is equivalent to the barred other. The Thing emerges outside of the symbolic order as an object, and so does the Other. A covenant between the Thing and jouissance cannot be enacted if you side with the Thing, with massive jouissance” (Miller, Pg. 23).

But later there becomes the period of rapport between the signifier and jouissance. Miller comments:

“In Seminar XVII, Lacan proposes a cut between libido and nature. There is now a rapport between the signifier and jouissance, and between knowledge and jouissance” (Miller, Pg. 37).

As Tom Waits says, “There’s no prayer like desire. There’s amnesia in her kiss. She’s a swan and a pistol and she will follow you like this.” Desire is ultimately that which aims at a hole in which you have to enter through analysis.

In this graph (below) I try to identify the varied directions that my desire circles around my symptom, although my symptom is of course a mystery to me. On one pole I have identified phallic and feminine relations to desire and both cause a certain form of anxiety. I have begun to characterize the phallic pole with a type of submissive desire that is associated with phallic relations to men based on a relation to my father. 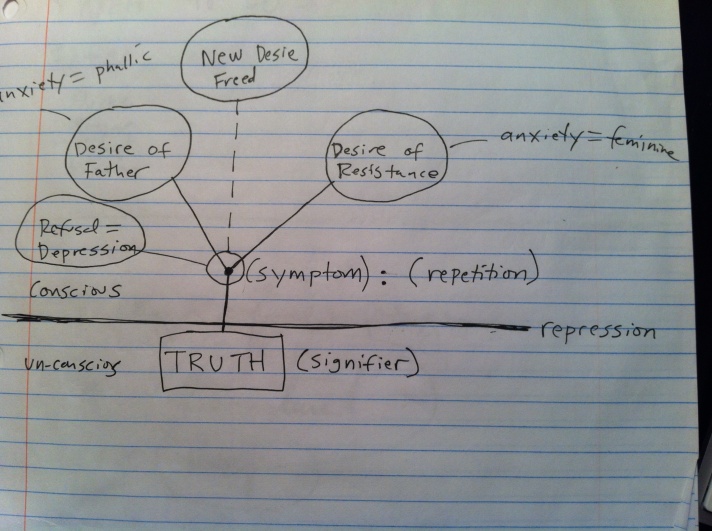 What little (I think) I know at this point is that there is a repetition tied to an enigmatic signifier, what I am calling TRUTH is what I want to possess. It is what I want to free up. Desire aims towards some unknowable chasm and you long to cross it. It seems that the only way to cross that bridge is to create a middle path towards it, to create a rapport.

3. The really big things matter little in analysis. As you approach what is by all objective measures what you perceive to be a difficult and perhaps traumatic memory or topic, the analyst doesn’t show compassion towards the issue. The analyst is looking for signifier relations, for slips, and this is tied to signifier relations. In Seminar 14, the Logic of Fantasy, Lacan defines lalangue as “indecisive between the phoneme, the word, the sentence, and all thought. It is what is at stake in the master signifier.” In my speech at times I sense that the analyst is seeking to read into my syntax to discover lalangue. As Lacan, points out, “in desire you aim at the gap that shows that the One only stems from the essence of the signifier.”

4. You enter into a new relationship to language. J.A. Miller has referred to this type of analysis as “analysis of the real.” The idea is for the analyst to interrupt the patient at a moment when the language of the analysand begins to slip, when ones language begins to face towards the real. The only rule of analysis is that you must speak what is on your mind… until you get snagged. The cut of the analyst usually takes the form of a question is the only thing that can stop me. And the real strength of any analyst is precisely their ability to put the puzzle pieces together in such a way that they know when to cut. That they know when to discern a real event from a pseudo-event. This is tied to the lesson #3 that what you take to be significant isn’t always so.

5. Your vision begins to alter. If ever there was proof of Oedipus it would be through the scopic drive. You don’t become blinded by analysis, but you open a new line of sight. For example, after leaving analysis I had noticed a large abstract painting in my analysts home that I had never before seen. My analyst refused to tell me whether it was recently put there or not. By the fourth time I went to analysis I was obsessed with an image of an X-Ray of a young child’s mouth that I saw on Facebook. There was something about the jagged edges of the mouth and the disjointed look of the image that made me feel an sense of immense abjection. Like I was nauseated without feeling like I had to puke. Then I began to have this same feeling around any image with asymmetry or holes in it. Pretty soon I realized that it was the holes along the surface that caused this feeling of abjection. This seems to be tied somehow to my sense of vertigo, to a certain nothingness that I am afraid to face.

6. Analysis can cause vertigo. Related to the reaction I am having to holes along surfaces, there is often a feeling of vertigo that sets in when I contemplate these surfaces for too long. Yet the space in between these cracks along the surface while evoking vertigo, they also remind one of the need for analysis, of the need to go back into your hole. Perhaps this is why being on the couch is necessary, because you need to center your point of gravity. It is also a strong probability that analysis has revealed to me that I experience trypophobia, a feeling of nausea when looking at clustered holes.

7. Analysis is not really about compassion for your ego. Because the terrain that analysis works in is language, there is often an insensitive attention to your “problems”. This is vastly different than ego psychology, which seeks to fortify the ego to facing problems, or even to humanistic psychology that seeks to shelter the ego from trauma. In other therapy I have done, the approach was around getting me to harness my feelings when something bad happens. From this we would develop an understanding of new coping techniques for how to deal with a problem. This tactful based approach to therapy drove me crazy not only because it incorporated meditation as a tool along with other tools, but it seemed to refuse to go deeper into the source of a certain anxiety or issue. Psychoanalysis (as I have experienced it) wants you to enter into this space that is haunting and to keep going through it.

8. You become more able to speak of psychoanalysis in the realm of theory. The big Other, phallic jouissance, das Ding, and so on. These concepts are all the sudden the point of your analysis. You speak about them and they become a part of the transference, so part of the work you do in analysis incorporates them if you are fascinated by them. It does not sideline them like I was afraid it might. As my friend remarked, the most beautiful thing about psychoanalysis is that you as the analysand are the philosopher in psychoanalysis, not the analyst.

9. Once you develop strong transference with your analyst you go to the couch. Developing transference is crucial. It seems to require a certain amount of anger mixed with respect that you put onto your analyst and it is at this moment that you are ready to really begin analysis in a rigorous manner.

10. Psychoanalysis is humbling. The most humbling part of psychoanalysis comes when you convey a confidence to your analyst that you feel ready for something and that you have identified some truth about a relation you have with someone, for example, and they respond, “isn’t that a wish and not a truth?” Or they often say, “yes, I know but is that the truth?” By having the courage to start analysis you feel that you deserve some major insight at face value but in truth you’ve only begun.