In 1932 Freud and Einstein corresponded in two letters back and forth on the topic of how to end war. The topic was prompted by Einstein and both men held high aspirations, we might even say a utopian dream for the League of Nations to serve as a cosmopolitan consensus-based model for the ending of war.

It’s shocking that this correspondance is not more well known. It should be in the curriculum of all peace studies, and as someone who did their graduate work (in part) in the field of peace studies, I can assure you I never ran across it. This is due in part to the ahistorical trajectory of most academic fields and to Freud’s complexity, not Einstein’s. As you can see from the letter, Freud offers a much deeper analysis than does Einstein. 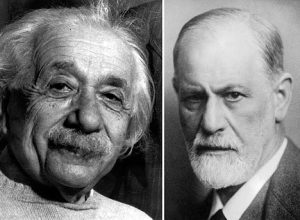 What interests me the most is towards the end of Freud’s reply to Einstein he addresses the topic of death drive and how we must re-route man’s destructive energies into positive social action to overcome what psychoanalytic theorists today call “excess.” Freud calls for a Kantian ‘dictatorship of reason’ that embraces a consensus model of decision making in the form of a League of Nations, yet he points out how the evolution of man to be able to be pacifistic still has a very long way to come and that the natural state of man is one that leans towards war. Can we say that one can be Freudian and Kantian, or do we read into Lacan and thus always disregard psychoanalysis to be a system of thought unable to operate on a rational communication model in politics? — i.e. Lacan claims all communication is failure, and all language is a torturing prison house.

In the letter, Freud falls into a sort of German romanticism similar to Oswald Spengler in his argument that culture and man’s embrace of culture, which is highly westernized in its conception and understanding, I’d even say teleological is the source for the realization for ending war Why?

Freud argues that culture is unfolding in such a way that it may result in the realization of mass enlightenment, a sort of naive Hegelian view of the end of history. Would Freud be an advocate of the end of history as such? He said that the only civilization that could experience unhappiness purely is the one that no longer needs psychoanalysis. So the relevance of psychoanalysis is intimately linked to the realization of culture as Freud defined it in 1932, as that process which lifts man from his concubines of un-reason and libidinal death instinct.

Freud also posits an organic side and a psychic side to cultural change:

The psychic changes which accompany this process of cultural change are striking, and not to be gainsaid. They consist in the progressive rejection of instinctive ends and a scaling down of instinctive reactions. Sensations which delighted our forefathers have become neutral or unbearable to us; and, if our ethical and aesthetic ideals have undergone a change, the causes of this are ultimately organic.

On the psychological side two of the most important phenomena of culture are, firstly, a strengthening of the intellect, which tends to master our instinctive life, and, secondly, an introversion of the aggressive impulse, with all its consequent benefits and perils.

Now war runs most emphatically counter to the psychic disposition imposed on us by the growth of culture; we are therefore bound to resent war, to find it utterly intolerable. With pacifists like us it is not merely an intellectual and affective repulsion, but a constitutional intolerance, an idiosyncrasy in its most drastic form. And it would seem that the aesthetic ignominies of warfare play almost as large a part in this repugnance as war’s atrocities.

What Freud points to then is that the solution to ending violence in society must be met at the socio-symbolic level, not at the instinctual level. The organic process of change is led by the socio-symbolic changes – i.e. by the psychic changes, what Freud is calling culture.

4 thoughts on “Freud and Einstein Letters: How Do We End War?”