Must one smash their ears before they learn to listen with their eyes?

Two deer came running up the canal
They were frightened but graceful,
Dashing in big leaps up out ahead of me
I hurried my pace and they jump down from the trail, into the canal
Running on frozen mud and garbage
I could hear each thump of their feet
Landing on the ice 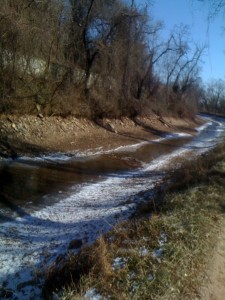 We ran alongside one another for a minute,
Almost forgetting the other were there
Pretty soon they broke out in full stride
Jumping up onto the trail right in front of me
They took a hard left at an opening

I slowed my jog down, lowered the volume of my music
and took a left with them

The road was dead-ended
A metal chain link fence about 6 ft high
Had caged them in
They turned to escape but I was standing there – blocking them
So they rammed their heads into that chain-link fence,
Like they couldn’t see it
Was really a metal barrier

They’d ram their heads, look back at me
and then frantically run a half circle between me and the fence
and ram their head again.
This went on for about a minute

There I stood,
that wind still stinging my lungs and heart
now racing
glasses fogged up with steam.

How close can you get to an animal ramming its head against a wall? 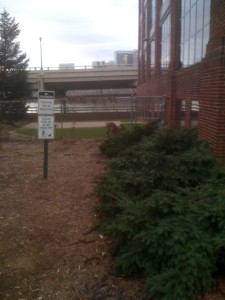 They never grunted or made a noise
They just bounced from the ground,
Back into that fence with a blind determination

Must one smash their ears before they learn to listen with their eyes?

Just then the mother runs right past me,
Dashing in one burst she breaks out
Her grace amazes me

And besides, the series of events that have brought us here
Seem out of our control
I have been brought to this place
She has been brought in front of me and that fence
The wind had picked up and blew hard
I looked around to see what else nature had in store
What other coded messages lay waiting to be unraveled 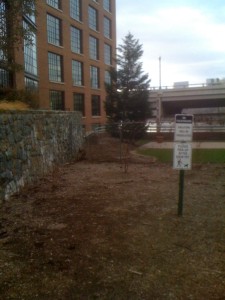 I let the fawn alone and moved along down the trail
My music back on I begin to
Head back, glancing on the spot, and she has left
I run up past the canal and back onto 31st St.
Ending this jog

Entering my house I call for my wife and she’s
There in bed, her eyes dart across the room to meet mine
I smile slightly as I take off my headphones and turn off the music

One response to “Must one smash their ears before they learn to listen with their eyes?”