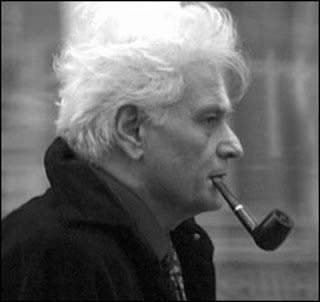 Derrida’s philosophy of Differance was the central position he felt most at ease with when considering his larger philosophical project. Literary departments in America beginning in the 1980’s absorbed his Deconstruction as dogma, and it was partly for this fanfare that Derrida leaned on Differance as his signature. The thought (he would be sceptical to consider it a theory) came about in an essay that was built around the influences of semiotics and Saussure’s lecture on General Linguistics, in combination with strong critiques of Heideggarian presence and a general aversion to all originary principles in philosophy.

Derrida adds an “A” to the Frech pronunciation of difference so as to reveal a major problem of modern linguistics and meaning formation. This “discreet graphic intervention” invokes a discussion on the problems of written and uttered words, mainly that certain differences in meanings cannot be heard, but can only be read.

The thought of differance is best described as a way of conceptualizing, but not in the Platonic sense, as a thing from which everything else flows. Differance is the process (even though he omitted even that word to describe it) of scission or division that produces, or constitutes things and differences in meaning and meaning making. Derrida’s reluctance to define differance stems from his rejection of what he refers to as a, “metaphysics of presence” in modern philosophy. The metaphysics of presence refers to the general philosophical obsession after Hegel that brought philosophy into a presuppositionless state, resulting in a pervasive idealism.

There is the noun deferral which means temporal spacing, and distancing, rendering an ambiguous double meaning of these two words. The minute and immediately reducible differences in meaning assigned to these two words leads to difference. Difference, or the deferred application of meaning ascribed to this word is ambiguous in its meaning; identity, otherness, alterity, being discernible, distinct, and secondly it can connote some kind of temporal and or spatial separation, interval, distance, deferring…

This double kind of differing/deffering paves the way for the problem of all sign making and relations. All signs (written words) point away from themselves and therefore involve a deferral of meaning, while at the same time create the illusion that the meaning is present. The sign then stands for the absence and represents the presence in its absence. This is the customary feature of difference.

If there is an absence of meaning in the sign then where is meaning assigned in that transcendence of meaning? Derrida is skeptical of transcendental philosophy and refuses to assert an identifiable transcendental move before the differences actualize. Differance, then is the non-origin, or the non-simple structure and differentiating origin of differences.

In other words, we are always already caught up in the differance so there is not an origin in this minute meaning displacement. It is an action in which I am involved but which I am not the agent.

This rather obscure and eluding notion or difference became the focal point and eventually the entire summation of Derrida’s later philosophical work, especially as it relates to theology and to religion.

It was the spaces opened up in difference that religion, or the prophets could be located. Derrida invoked Levinas’ powerful evocation of the other: it was when the relation between me and the other is intervened by a third person that the sphere of hope, justice and religion emerge. This space of differance has been a noted subject of philosophical inquiry beginning with Hegel’s Identity and Difference, and in Nietzsche’s continual emphasis on the “active indifference to difference” in western philosophy, via the eternal recurrence of the same.

Derrida’s philosophic project was based on a tacit refusal to isolate meaning in any systematic totality or original source and this reluctance kept his thought on the margins of discourses, and involved in the competing and infinitely interrelated contexts. His cult of deconstruction in American academe became the fourth thesis that usurped the dialectic, it is there that his thought can be found, lingering in the shadows, or specters of meaning, because after all, meaning is inherently and ineliminably distorted and to seek meaning from anything outside of the text is superfluous. Indeed Habermas was accurate in his criticism against Derrida when he claimed that he does not proceed with arguments; rather he slices up contexts to show the infinite range of meanings. The text in this sense refers to events from the French Revolution or to texts such as Finnegan’s Wake for example. Richard Rorty is also instructive in commenting that Derrida is not doing philosophy traditionally but is actually alerting readers to the undisclosed possibilities in certain texts.

The late Derrida is obsessed with apocalyptic and futuristic thinking and even posits an epistemology that has transcended all immanent possibility and entered a realm of continual and recycling futurity. Genuine decision making then is the boldest of leaps, as it is always blind. To make a decision is to enter the abyss by transcending the world of continuity and casting oneself into a world of indeterminancy.