Notes on Heidegger’s books on Nietzsche 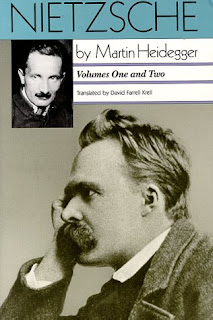 – In Heidegger’s two books on Nietzsche, he is seeking to answer the way in which being as a whole is. The general force of the world is ever-present and yields the closing of the world and of its becoming. The finitude of becoming, the advance and progress of cosmic occurrence into infinity is impossible- thus the world’s becoming must turn back on itself.

– Enframing is the way in which the real reveals itself as standing-reserve. The real more or less everywhere becomes standing reserve. The destining of revealing is not any danger, but the danger. The more danger, the more an exponential growth of restoring technology to its essence is allowed. Or rather in technologies essence roots and thrives the saving power.

– Yet the worlds becoming runs backwards and forwards in endless (infinite time) as real time. The world has never reached a homeostasis of the finite possibilities of being must by necessity be exhausted in time. The world as chaos is occurring simultaneously with the eternal recurrence.

– To clarify the mode of thought of the return: it is a deduction based upon a series of propositions. It is the unfolding of a projection- not a verifiable proof based upon the rigid rules of logic. Man sees things from a limited corner, which forced the theory to transcend any humanistic trappings. Nietzsche decides to embrace both the cornered standpoint of dehumanized beings and to affirm the humanized beings of rigid standpoints. It is a thought a moment and it cannot be theoretically applied nor practically applied.

– The return is an earthly religion, by not positing a world “beyond.” The nihilism or absolute skepticism is replaced in lieu of not accepting any pre-givens. What is true is whatever in the perpetual flux and alteration of Becoming is fixated. Whatever grants the consolation of tranquility. I will grant life the inalienable right to become, all creation is communication, the knower, and creator and lover are all one. Genuine creation is forever alienated from its purpose.

– The whole doctrine is a belief because it is a meditation upon being by beings, fixating beings in a grand “projection” of being. By the difficulty of the thought, renders it a belief. As fixation, belief is the securing of permanence. The eternal return of the same serves as the Being that determines all beings.
Will To Power as Knowledge and as metaphysics:

– What is thus in being is the truth. Nietzsche’s critique of Christianity has as its presupposition a Platonic flaw in the religions world-view. By positing being as something constant and changing and the corresponding opposition of what is inconstant and changing as nonbeing and merely apparent being is a specific valuation.

– Value is a condition of life. To condition, being a condition means to constitute a condition. Valuation is the way life brings its essence to fruition. The true world must be a constant one, one that is removed from mutability and transformation. A value is what has the character of maintaining itself as such in its constancy; it must not have secured the corresponding individual conditions. Truth is in its essence an estimation of value. Yet this taking something as… is the behavior necessary for securing the constancy of life.

– The world is a becoming world yet to hold that view is a valuation. Truth is holding something to be true; our question is concerned with life as knowing.

– Not to know but to schematize upon chaos as many forms and regularities as our practical needs require. Not what does he get it from, but what is he saying with it? Nietzsche’s conception of schematizing is historically linked with the essence of reason and the use of categories. What is to be known is chaos, knowing is a schematizing of chaos to serve practical life-needs.

– When we speak of an ordered realm of objects and representations that are structures we are talking of a world that we already know. The word chaos points to a gaping, a yawn or opening. Chaos is what moves and flows but whose order is concealed. Chaos is the name for a peculiar projection of the world as a whole and for the governance of that world. The world as chaos means beings as a whole projected relative to the body and its bodying. Art transfigures life and bring it into higher realms of possibility. Only through magic does life remain awake. Art is an excessive overflow of blossoming bodily being into the world of images and desires. What transfigures is what becomes. We encounter chaos in bodily states- our body bodies forth as a wave in a stream of chaos. For Nietzsche chaos is the world flowing in all of its unmastered abundance of self-creation and self-destruction. What knows is the living being that grasps the world and takes it over. Knowing is a stream that in its flow creates the banks and turns them towards each other in a most interesting way, not a bridge that connects two banks!

– Chaos is that to which knowing as schematizing responds. Chaos/Practical Need. Being is presencing, subsistence, permanence, withstanding disappearance and atrophy. Practical and praxis are always taken in the essential sense. Praxis or activity is grounded in the vitality of life. Praxis is in itself the securing of stability. The need for schematizing is in itself a looking for stable things- and their ascertainability, that is, their perceptibility. This “practical need” is reason.

– The practical need to schematize is in itself a looking for stable things, which the practicality is reason. In the formation of logic it was the need not to know to schematize was to draw into accordance and calculation. Reason consists in the adjustment of and invention of what is identical. The selfsame attitude must be preceded by a creation. Creation must always occur before there can be thinking in its usual sense. The poetizing of reason becomes the faculty that forms and images to itself everything that beings are. In Platonic terms thought is the highest origin bestowed into the soul of man down below. The schemata format of knowing is a minor inversion of Platonism. The invention of the idea is process that every sense impression goes through. Finality in reason is an affect not a cause. A direct inversion of Platonic thought. Purpose is a cause- (something that emits an effect.) Finality is emphasized because it is essential to reason for it looks ahead to something, for all being intent on constancy is fundamentally a constant setting before oneself of something aimed at.

– Nietzsche’s Biological Interpretation of Knowledge: Categorical knowledge is a conditioned truth. Thinking in categories is a form of biologism, especially because he attempts to raise everything to the essential level. All of this thinking is perspectival, or conditioned by the essence of life. The compulsion to draw a determination based on either/or or one or the other is a subjective one, based on the constitution of the human. This ability to avoid contradiction is biological. It is the essential tool of man to master his permanence he must annul all contradictive thinking.

– The eternal recurrence of the same thinks the will to power to its final consummation.

– Meaningless now becomes the meaning of beings as a whole. The meaninglessness in which the metaphysical articulation of modernity is consummated becomes something we can know as the essential fulfillment of this age only when we conceive of man as pure objectivity. Correspondingly, representation is the mis-calculating securing off of the horizons that demarcate everything we can perceive along with its explicability and its use.

– Nietzsche considers the suprsensuous as values, not “platonic ideas.” The immediate present, or that which is perceptible, is measured against desirability, that is against an ideal. This interpretation of metaphysics is a moral one, which conditions all beings through will to power in their being. Nihilism is the process of the degradation of the uppermost values- the decline is evident in the utter collapse of these values hitherto conceived. This is the fundamental event of western history, which has been sustained and guided by metaphysics. In place of the death of God lays the authority of conscience, the domination of reason, or the God of historical progress, or the social instinct. The nihilistic devaluation of the highest values does not exhaust the essence of those values.

– The devaluation is the utter collapse of prior values. The collapse implies the absolute necessity of the new application of values. The original anticipatory, unifying unity constitutes the essence of totality. Nihilism is the lawfulness of the European experience, or the logic of it. This marks the historicity of the western experience, experienced in terms of the metaphysics of will to power. The cause of nihilism is morality or the supernatural positing of ideals of truth, goodness, and beauty that are valid in and of themselves. This positing of the highest values also posits their devaluation which already begins when these values show themselves to be unattainable. Life seems unsuitable and incompetent for the realization of these values. These values show themselves to be unattainable. To distinguish pessimistic analysis he cites it as historicism. Ecstatic nihilism is thinking on the divinity of the God Dionysos- The will to power is an entirely new place to posit the values, an entirely new open space for the values to come to fruition. That is to say that values are posited through a re-valuation, or conceived as conditions of will to power. Then what value does the totality of beings have?

– Aimlessness is a fundamental value for the nihilist. The metaphysical expression of this is “eternal return of the same.”